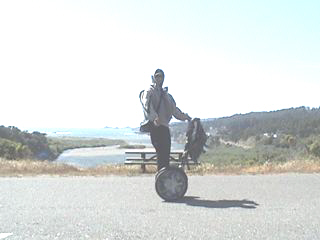 A Segway may seem a little tame for a professional slalom skateboarder, but for 2003 Slalom-Cross world champion Richard de Losada, his Segway has become the transportation mode of choice for short errands and trips to the beach (as well as playing Segway polo).

A resident of eco-community and tourist destination the Sea Ranch in Northern California, de Losada certainly thought his Segway was the perfect choice for the green lifestyle promoted by the community.

He found out differently on Feb 24, 2007, when the Sea Ranch Association gave him a ticket for a covenants, conditions, and restrictions (CC&R) violation for riding his Segway.

Richard, who had moved his family of five kids to the community for the “good clean environment,” limited his Segway use, even though the community’s CC&R didn’t specifically mention such vehicles.  He didn’t ride it around the community, but continued to use the Segway for other trips. “I could ride 4-5 miles on 10-20 cents of energy,” said Losada, “so it seemed like a no-brainer. But I observed the rules at the Sea Ranch.”

Richard’s run-ins with the community association probably would have ended there.  But, on April 18, 2008, he was involved in a work accident: a tire blew out on a riding lawn mower he was operating, the machine

rolled over, and Richard was left with a broken nose, hairline fractures in his ribs and skull, and dislocation of both hips. “The weight of the machine almost broke my back, so I guess I came out of it lucky,” he said.

The accident left Richard not only unable to work, but also with very limited mobility. Suddenly, the Segway wasn’t just a greener choice for transportation: according to Richard, it became his “magic carpet.”

The Sea Ranch Association didn’t see it that way, though. Despite his disability, Richard was again ticketed for riding his Segway in the community on January 15, 2009.  This time, the citation was more specific: two-wheeled electric vehicles are not allowed in this “green” community.

I did reach out to the Sea Ranch Association for comment, but received no response. The CC&Rs for the community are available online: while I found no reference specifically to “two-wheeled electric vehicles,” the document does clearly state that the Association can make rules concerning “the type or types of vehicles other than conventionally equipped passenger automobiles which may be permitted to use the roads” (Article V). I’d still be happy to talk to a representative of the Association…

Richard’s issue isn’t with the Association’s right to make rules, though: rather, he’s concerned with the rules themselves. “This is a community that promotes itself as green,” he told me. “Why would they ban the use of a vehicle that’s also green?”

That’s a good question… especially when that vehicle is also being used as transportation for someone with mobility issues. I’d be really interested to hear what others of you have to say about this issue.  Are these kinds of limitations common in such communities (green or not)? If so, why… I still can’t wrap my head around the idea of banning Segway use period. They seem no more offensive than bicycles…