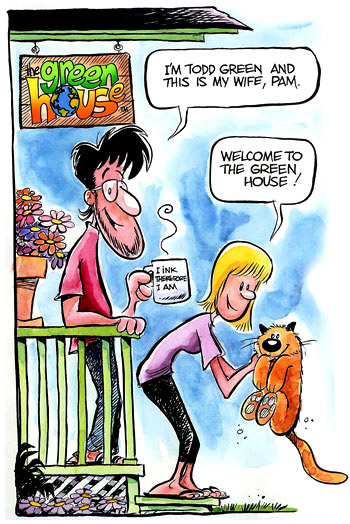 I got the wonderful opportunity to interview Brad Gilchrist one of the creators (along with Peter Menice) of the cartoon The Green House. We will be highlighting their weekly strip “Shades of Green” on the EcoScraps blog every Monday. As an aspiring cartoonist it was very informative and interesting to hear about the directions their work has taken them and how they ended up together creating The Green House. Brad and Peter have both enjoyed successful careers as cartoonists, but I feel the true success is on its way. By “true success” I mean making a comfortable living doing what you love while making a difference in the world. As Brad puts it in the interview after the break:

“Which means more people seeing that living a simple, conscious life is more cool and rewarding than having a McMansion and a Hummer or II.”

You can play a part in their success by calling or e-mailing your favorite papers and tell them about the strip and the web site.

For my interview with Brad Gilchrist…

What are your backgrounds?

I started working with my brother, Guy, directly out of high school, helping him write an educational comic book for The Weekly Reader Group. While doing that, I met Mort Walker who introduced Guy and I to King Features Syndicate, who was looking for someone (or sometwo) to create a new Muppets Comic Strip. SOMEHOW, Guy and I got the job and worked with Jim Henson and his creative staff for 5 years on the comic. During “The Muppets” I got married and enjoyed my most important success, a fantastic, supportive wife named Beth. From 1986- 1992, I did free lance, wrote some books for Looney Tunes and tried selling my own comics unsuccessfully. To make ends meet I did landscaping, tiling and drove a snack food truck – then I came up with an idea for a creative Family activity program called “Together Time.” It was a monthly package with a magazine (stories, information, trivia, games and craft instructions) plus all the materials you need to make the crafts. It was a box that you could open up and make things, read, color a big calendar. . . And spend Together Time with you kids or grandkids. It was a fairly nice success and got me back into writing and drawing.  In the late 90’s Guy approached me on the idea of trying out for the Nancy comic, which he learned was looking for a new creator. I wrote it, Guy drew it and we got the job.  While it was a real challenge to write in Ernie Bushmiller style- it was great to get back into syndication and be back on the comics page.    We’ve been doing it for about 11 years now, and I’m starting to back off of the writing and Guy’s taking that over, so I can work full time on The Green House and Shades Of Green, the once a week version of The Green House.

When and why did you start this line of cartoons?

One of my unsuccessful comic ideas was called “Down To Earth” and was about a cartoonist who created a comic strip about a Superhero Earthworm.  I’ve always been into green ideas, although back then, I think it was just “ecology and environmentalism.”  The ideas seemed easy to come by for me. “Write what you know. . .”  I also liked the idea of spinning off the Superhero Earthworm, “Wormy,” into a children’s educational comic strip once “Down To Earth” got rolling.

I worked on this for a year or so by myself, then tried collaborating with my friend (and illustrator), Mark Brewer. It wasn’t quite working out for either of us and I put it aside for a few years while working on Nancy. In 2000, Mark and I went to New York for the Annual Reuben Awards, the Academy Awards for cartoonists. Mark introduced me to a friend of his, Peter Menice and Peter and I hit it off. He also loved tiling and getting into the earth and all the green, wonderful stuff I love.

Out of the blue, about 6 months after meeting Peter, I got out my old “Down To Earth” roughs, and thought I’d send them over to Peter to see if he wanted to help me resurrect the idea. That same day, Peter called me, also out of the blue, to ask me about some licensing issues. He was on his way home to Boston for a vacation- and I drove up there and met his family and talked about the comic. We both knew it was a perfect match for us- and we started working on it. After about 2 years, and several versions of the strip later- after getting rejections from all of the major syndicates, we decided to rethink our approach and came up with The Green House.  In The Green House Todd Green (the cartoonist) will eventually get the idea of creating a comic for kids about a Superhero Earthworm. It will tie in with a side story of one of our critter characters, Wormy and his dreams of becoming a superhero for the environment.

We sent The Green House to all the syndicates who were interested, but already had “green-themed” comics in the works, so we decided to create our own green syndicate, Core Productions. We’re moving along slowly but steadily and really doing what we love- now we just have to get into a bunch of newspapers, sell online subscriptions and make money.

What are your goals for the cartoon?

Let’s see. . . We’d like to be in 500+ papers and really reaching the public with a comic that has a positive message on the environment and being more socially, globally, locally and personally conscious.  We think that showing a young couple living a greener life is an important way of making a subtle difference in the world- along with the eventual goal of teaching kids about being green with Earthworm comics. It’s what Peter and I love to do, so it’s really gratifying to be able to illustrate our concerns in a way that utilizes or talents. By saying that we want to be in 500+ papers- that’s just a dream number that in the comic industry means you’re a major force. To get there would mean that Peter and I would be making a comfortable living, allowing us to do more to spread our message. . . Which means more people seeing that living a simple, conscious life is more cool and rewarding than having a McMansion and a Hummer or II. We have dreams of an educational green “compound” where we create and teach and share ideas with kids and adults. So, if anyone can help us get some more newspapers, we’d really appreciate it! Just call or e-mail your favorite papers and tell them about the strip and the web site.  We’re also trying to reach audiences with a greener form of comic reading- sending the strips to your daily by (cheap!) subscription or 3 times a week (free!) via e-mail. Basically, anything we can do to share our work. Sorry for the shameless plug. . . Sort of.

How do you plan on reaching out to the mainstream public (instead of preaching to the choir–as well all find ourselves doing most often)?

Oh, I kind of covered that one in my previous answer. . . But there may be another side of the question- focusing more on “preaching.”  When we first started sending the strips out on the internet, we got back a lot of. . . I’ll call them “activist” e-mails, telling us what a great vehicle we had here to inform and educate.

Well. . . That got us thinking that we really needed to focus on NOT preaching. Our focus has always been to educate by entertaining- sharing ideas and illustrating what we perceive as a conscious lifestyle. The strip is about a young couple, Pam who’s very well educated and focused on green issues. She’s a vegan, yoga instructor and special ed teacher. Todd on the other hand is a combination of me and Peter- a little goofy, wrapped up in music and drawing and trying to be a better, greener person. He eats junk food, loves baseball,  Springsteen and drawing. . . And he’s sort of a kid in a new world, trying his best to learn.

We also have a secondary group of characters who live in a landfill/ transfer station. The group is comprised of Link, a leftist blogger rat, Mantis, a sensei and objective voice of reason, and Wormy, a kid who wants to learn everything. Naturally, Wormy is well connected to the Earth and he starts to dream of doing great things to help it be a better and healthier place. So, he gets most of his information from two interesting sources and keeps dreaming. Eventually, he does become a superhero for the planet.

So, in a nutshell, Peter and I want to entertain first and let the details of our work and storylines creep out into the public psyche-  Subtle but steady, positive messages. There are plenty of very talented bloggers (you for one) to take up the daily concerns, education and activism. We’ll do our part personally, but not obviously in The Green House.

Who are your art and environmental heroes?

Charles Schulz (Peanuts), George Herriman (of Krazy Kat), Dik Browne (Hagar), Walt Kelly (Pogo), Norman Rockwell, Jim Henson and many others.
Environmentally. . . Rachel Carson got me interested in the environment back in 6th grade. “The Sea Around Us” was required reading for a cool science class I had called, Ecology. Then we read this book about two goldfish, Buck and Roe who got dumped into a pond or stream and had to deal with all kinds of issues. I’ve never been able to find that book or what the name of it was, but as a younger guy, it hit the mark for me. Of course, Walt Whitman, John Muir, Thoreau, Ansel Adams, and Gifford Pinchot have become inspirational as I’ve gotten old enough to understand them. Currently, and quite seriously, I’m inspired daily by the people who contact me about the Green House and link me to their work. I’m developing a nice network of people who I see as heroes for many important causes. They are truly inspirational. The Hollywood and Music stars get a lot of notoriety, but they are essentially the popular faces for all the amazing people who started getting their hands dirty and giving of themselves to help others. Oh, put Bob Geldorf on the hero list.

Just that I’m really honored by the attention and great feedback we’ve gotten on our work from really amazing people. The trappings and conventional thinking of the comic syndication world was slightly depressing- but also served as motivation to just do what we thought was a good comic strip, be true to ourselves and see what happens. What’s happening is that we’re being read by all kinds of people and reaching them. Believing in your work can be difficult at times, but seeing the response we’re getting and the connections we’re making is amazing.

Thanks Brad! And continued success!