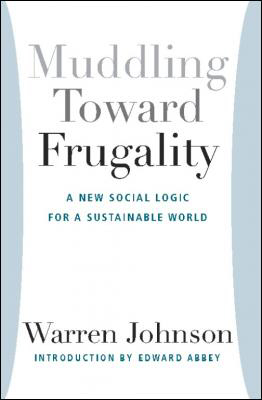 Editor’s note: This review is our contribution to Eco-Libris’ Green Books Campaign 2010. Eco-Libris arranged for a free review copy from Easton Studio Press.

We Americans like our simple, direct, and confident statements — just think of “Yes We Can!” or “Reload!” — so a title like Muddling Toward Frugality (affiliate link) may not immediately grab a book browser’s eye. Novelist Edward Abbey noted as much in his preface to the book’s original 1978 edition, claiming it “generates no sex appeal whatsoever.” Abbey, however, also noted that he really liked this book, and that the title was perfect for it. Thirty-two years later, a new edition of Warren Johnson’s treatise on “A New Social Logic for a Sustainable World” probably still won’t create best-seller status… but, as in the late seventies, Muddling Toward Frugality is an important work still very relevant to the times in which we live.

I initially thought I’d be reading another book on frugal living… a “how-to” on the the simple life. To some degree, that is the case, but this isn’t Mother Earth News. Rather, now-retired geography professor Johnson focuses on resource depletion… and the necessary changes dwindling amounts of fossil fuels will bring about in how we live on the planet. Johnson believes that higher prices for energy, and the products and activities it makes possible, will create the necessity for simplifying and localizing out lifestyles… environmental limitations will make anything else too expensive. We’ll have to make the best of what we have… which he argues is the original definition of frugality.

Simple Living without the Stoicism

However, Johnson doesn’t approach this from a “doom and gloom” perspective; in fact, just the opposite. He argues that, when faced with challenges, the typical Euro-American response involves invoking a “tragic” perspective: that is, we want to stand firm, fight hard, and perhaps even fail while fighting according to our beliefs and principles. But he believes that the way change and adaptation comes about is more in the comic vein (in the classical sense): we manage to survive by doing what little we can, and  “muddlingthrough.” If you’ve ever read or seen a performance of Thornton Wilder’s The Skin of Our Teeth, you understand the concept.

Now, you might get the idea that Johnson’s saying that we should just hang on and hope for the best; that’s not exactly true. He does, however, think that a shift to a more sustainable lifestyle won’t come through large-scale efforts, but, rather, through individuals and groups playing with simple living, and finding what works for them… and “what works” won’t involve major self-sacrifice, but rather lifestyles that maintain joy, happiness, and satisfaction. People will take a hard look at the world, realize that the ways they’ve lived just don’t work anymore because of the economic challenges created, and muddle forward to ways of life more in tune with those realities. In his vision, small communities will eventually replace large ones, and self-sufficiency will happen not through noble acts of rejecting unsustainable ways of life… but because it’s an easier way to survive.

Johnson practices what he preaches in his narrative: it definitely muddles. He throws out an idea, then considers its alternative, then maybe brings in another concept…. and tries to reconcile them all at some point. The style can be fun; it can also get a little wearisome with some of the more technical chapters (especially since they’re addressing technological challenges from a ’70s perspective). The trick to reading and enjoying the 2010 edition doesn’t involve looking for detailed answers to large issues of global economics and politics, but rather buying into the “muddling” concept while reading… and enjoying his ability to find connections in a wide array of topics: ecological history, myth and religion, agricultural science, economic theory, and much more.

Still, the book has a lot to offer in terms of framing contemporary economic and environmental challenges… it’s amazing (and a little disheartening) to see how many challenges from 1978 are still very relevant today. Perhaps we’re already muddling… or perhaps it’s time to start. Either way, Muddling Toward Frugality is one of those books, like Ishmael perhaps, that will have you thinking about the world in quite different ways once you put it down… and perhaps not feeling nearly as hopeless about the state of the world as you did when you picked it up.

The 2010 edition of Muddling Toward Frugality is FSC and Ancient Forest Friendly certified.

Ready to start your own muddle towards a simpler life? We can help… check out our current listing of gardening supplies, bikes, and renewable energy products