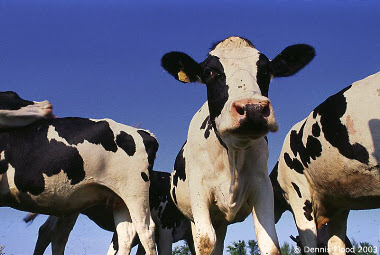 So, those of you who’ve been around for a while know that I couldn’t pass this one up: yesterday, Minneapolis-based Bison Renewable Energy broke ground on what will be the world’s largest methane gas facility in Sioux City, Iowa. When the plant begins operations early next year, it will hold up to 11 million gallons of cow manure, and turn that yucky stuff into methane gas. According to the Siouxland Business Journal,

The Bison Renewable facility will begin with 11 1-million-gallon tanks, or biogas regional anaerobic digesters (BRADs) and grow to 22 BRADs with an additional investment of about $7 million. Baumann said the technology has been widely used in Europe for about 18 years, but the largest plants there have just seven or eight comparable tanks.

The BRADs will be fed about 65 percent livestock manure with the rest of the feedstock being animal fats or vegetable waste from food processing. The glycerin left over from biodiesel production is also an excellent ingredient. The resulting methane could be used to produce electricity, but it won’t be.

“We are going to scrub out the impurities and then pump it into the (nearby Northern Natural Gas) pipeline,” [Chief Operations Manager Rob] Baumann said. He said that methane, which is odorless, will blend readily with the natural gas and meet or exceed its BTU levels.

The other byproduct, an inorganic manure residue, can be spread as fertilizer.

In case you’re wondering… the plants developers claim that local residents won’t have to suffer with massive pooh odors: “Baumann said the company will collect manure from livestock producers in sealed trucks which will be unloaded indoors, then used in a sealed process.”

I can’t see much to dislike here: get rid of massive amounts of manure from big cattle operations (which are also a problem in and of themselves, but that’s another post) that would otherwise leech into the water system, and release methane into the air. Turn it into a couple of useful products. Create a few jobs in the process (the plant will employ 75 people). Bring a few million into the county tax base. I suppose the only unanswered question is the energy input: does anyone have a sense of this? Do these plants divert some of the gas created to power themselves?