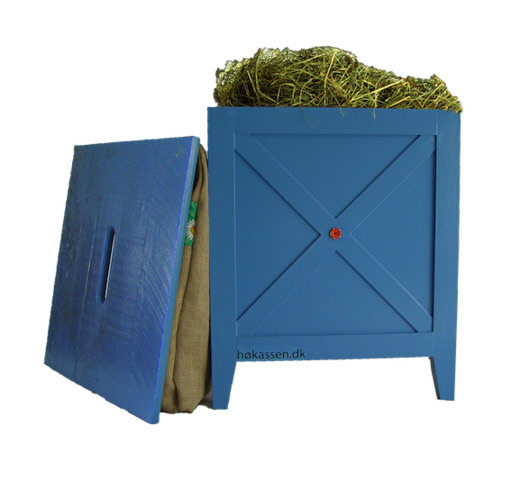 When I first discovered the Wonderbag, I remember thinking “What a cool idea – I’m amazed no one’s ever thought of that before!” Turns out I was just displaying my ignorance to myself: the concept of cooking with insulation, or “retained heat cooking,” has been around for ages (and is very common at Dancing Rabbit Ecovillage – I just missed it somehow). Essentially, once you bring a soup, stew, beans, rice, or other food cooked in liquid to a boil, you can place it in the insulated box and let it cook. You don’t need to use any more fuel. It’s slow cooking without the Crock Pot!

Hay boxes and other insulated cookers are like rain barrels in the sense that they all contain just a few basic elements: in this case, a container and an insulating material (which doesn’t have to be hay). So, you could simply use a cooler and a quilt. Unlike some of the other DIY projects we’ve featured here, though, a hay box could be designed to fit in your kitchen… even to work with your decor. So, I gathered up some project plans for various insulated cookers, with the hopes that you’ll let your imagination run wild… and that you’ll start cutting way back on your electricity or gas use for cooking.

The Original: the Hay Box

The hay box cooker probably originated somewhere in Scandinavia, but can  now be found all over the world… you could see how such a simple device would be very popular in the developing world. Want to make one of your own for camping, or for the kitchen? It’s pretty easy: the folks at Root Simple have created a very thorough overview of hay boxes. Want more of a step-by-step plan? As you might have guessed, there’s (at least) one at Instructables. And if you’re feeling really ambitious, you can make your own box from pallet wood:

So, after looking at some plans, the only difference I can see between Wonderboxes (which came out in the sixties) and Wonderbags (which are only a few years old) are the number of pieces: the former has two, the latter one. Each involves fabric and insulating material (generally pieces of polystyrene foam, though you don’t have to use that… anything that will retain heat will work). There’s lots of room for design fun here as these projects involve fabric and sewing. For the Wonderbox, I found plans at iwillprepare  (including a printable PDF version of the instructions), and at Food Storage & Survival. Prefer the bag-style cooker? There are instructions for those at New Life, New Purpose.

Need some help figuring out what to cook in one of these? We’ve got you covered there, too, with this recipe booklet.

Have you made your own hay box, or other powerless slow cooker? Share your plan with us…