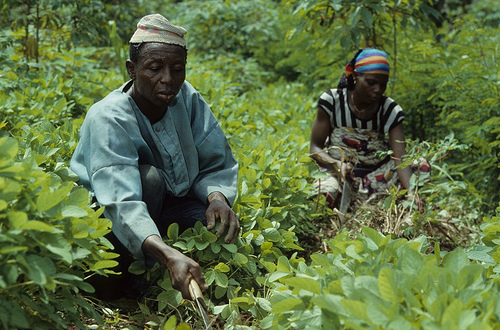 Just what the heck is organic food, anyway? When a particular product is certified organic, does that mean the same thing that we imagine it to mean — that the food was raised without pesticides, was grown responsibly and in a non-destructive manner? Well…. maybe not. In a can-o’-worms-openin’ article for Scientific American, Christie Wilcox delves into some of the myths behind organic standards in the US.

Is organic food really all that it claims to be?

Even after reading the article (which at first glance reads like a lobbyist push for industrial agriculture), the answers are not clear, and that is the most unfortunate truth about the organic vs. conventional debate. In the article, Wilcox claims that organic food is no healthier than conventional food, it is not better for the envioronment, nor do organic farms use pesticides.

I do not doubt there is a huge lack of clarity about the issue, that there is no simple answer to the question, and that there is some truth in Wilcox’s claims. But I propose an alternative angle to the overwhelming “debate” that is organic vs. conventional.

Perhaps the issue is better viewed as whether or not food that is produced on a small-scale is “better” than those same foods produced on a huge industrial scale. For example, there is no doubt that I can oversee my vegetable garden in a much more responsible, respectful, and ecological way than a gigantic farm can. I can give my plants individual care, I can carefully control what I choose to use in my garden, and ultimately, I can actually manage a garden as an individual and adapt as needed.

This leads me to believe that there is some scale at which agriculture ceases to be effective, responsible, and healthy (for both the farmer and the folks consuming the products of the farm). When a farm crosses a certain threshold (some unknown acreage), the human connection to the products of the farm is lost. Does a farmer responsible for thousands (or even hundreds) of acres feel a close connection to his/her operation? Do the crops receive the same attention that a gardener can garnish upon his/her vegetable plot? I doubt it.

I do believe that the more connected an individual feels to his/her food production, the more responsibly it will be raised. (The economic piece complicates the issue, no doubt, but I still believe that this is true.) What is that scale? I don’t know in exact scientific terms (and I rather not think in those terms anyway), but perhaps it’s when a farm can be managed by actual humans with an actual connection to the land that is most crucial to blazing a trail towards truly sustainable agriculture, healthy land, and safe and healthy food.