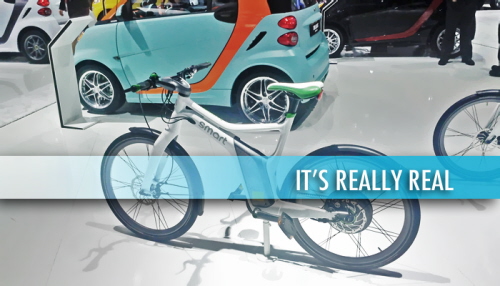 Thought a Smart couldn’t get any smaller? Well, perhaps not on four wheels, but at this year’s North American International Auto Show, the company known for its tiny cars rolled out… a bicycle! Jo Borras at sister site Gas 2.0 has all the details on Smart’s latest “vehicle.”

The production version of the pedal/electric Smart bicycle quietly debuted at this year’s Detroit Auto Show carrying a $2950 price tag. Along with the price, the bikes carried a features list full of clever, high-end components aimed at making the bikes both more durable, and more convenient, for its end-users.

First shown as a concept back in 2011, the Smart bicycle that bowed at NAIAS this year stays visually true to the original. For durability, the traditional bicycle chain is replaced with a durable belt drive system that can’t rust, won’t bind up/get thrown, and which (perhaps, most importantly) won’t tear up your pants if they happen to wander too close to the bike’s drive. An LED headlight, sturdy and aerodynamic front forks, and high-quality disc brakes mounted to wire rims with high-end Continental bicycle tires round out the “bike” hardware.

In addition to being a high-quality bike, though, the Smart bicycle is also an EV. Powered by an easily-removable battery (so you can charge it in your home or office) and a rear-mounted “Smart Drive” electric motor that’s visually similar to the Copenhagen Wheel. So equipped, the bike can be pedaled, pedal-assisted (where the electric motor boosts the rider’s own power), or pure EV modes.

According to Mercedes/Smart reps at NAIAS, the Smart bicycle will initially be available in 5 markets (she said Los Angeles, Portland, New York, Miami, and “one midwestern market”) starting this spring.