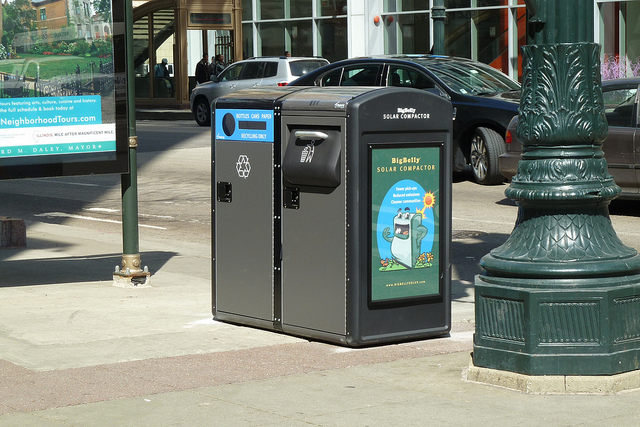 I’m a daily user of publicly-available commercial trash cans: whenever I have the dog out for a walk, I’ve usually got to make a deposit. Like most of us, I take those trash receptacles for granted, and have never given much thought to the resources that go into maintaining them. I do know, though, that sometimes these cans have plenty of room in them, and other times, they’re overflowing. I also know that regardless of the situation, the city’s refuse collection service makes its rounds about once a week.

If you think about it, that’s incredibly inefficient. Sure, if a can’s overflowing, you want it emptied immediately… but if it’s not, or only partially full, isn’t it kind of a waste of labor, energy, and material to have a worker check on it/empty it? Wouldn’t it be much more efficient to empty that trash can or recycling receptacle when it was full… and not until then?

Contemporary information technology makes that efficiency ideal for public waste receptacles possible, and Bigbelly, Inc., has combined such technology with solar power to create “smart” trash and recycling receptacles. Adding sensors and compactors to commercial trash cans allows them to send real-time data about their “fullness” to web and/or smartphone apps, so waste haulers can make those collections at the time they’re needed (and know that an individual can won’t have overflowed and spilled over). An “internet of things” approach streamlines a service that, traditionally, almost required waste of energy and time: service routes can be created on the fly to maximize efficient use of these resources.

If  you think that sounds like a brilliant way to manage public trash and recycling collection much better, you’re not alone: the company won the People’s Choice Award for top Smart City Application at the 2014/15 Internet of Things (#IoT) Awards. And the units are doing much more than managing trash:

Think of each waste and recycling unit as a self-contained power plant to which applications and appliances that measure foot traffic, air quality, radiation levels and more are easily attached. Its connectivity can be expanded to offer free Wi-Fi to residents. Think urban development, public safety, and broad communication for the public. Some of these ‘ideas’ are already in the works with pilot programs underway.

So, a platform (if you will) for gathering waste and information. Yep, I’m impressed, and not at all surprised to learn that thousands of these units have been deployed globally. If you’ve used one, either just to dispose of waste or better manage trash and recycling, share your experience with us.