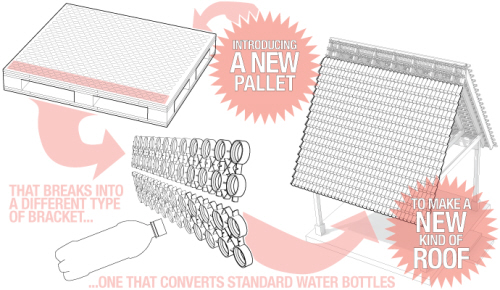 We often refer to our homes as “the roof over our heads”… but, unless it needs repair, we generally don’t give much thought to our actual roofs. That’s often not the case in the developing world, where makeshift roofing of materials like corrugated tin often provides minimal protection in normal conditions… and often none when disasters like hurricanes strike.  These materials often trap and/or radiate heat, and provide no natural lighting, making for an uncomfortable and unhealthy living space.

A team of architecture professors at New York Institute of Technology have made roofing in the developing world and disaster zones their focus, as a universal design made from locally-available materials would prevent a lot of suffering and discomfort.  Their solution-in-process: the SodaBIB, a roofing system made from reused plastic pallets and water bottles. Based on the ancient concept of the thatched roof, these designers realized that plastic bottles literally litter the world… and can be put to much better use. Take a look at their explanation:

Not only does this concept address two types of materials often wasted – pallets and bottles – but it’s also DIY in a very literal sense: anyone who can screw on a bottle cap can build the roofing structure. Yes, there are still challenges to overcome (which are well detailed on the project site), but, in theory, this is revolutionary.

Want to help these investigators and their students move their project to the next level? As the video above mentions, they’re running a  Kickstarter funding campaign. The rewards for donations are unique and tied directly to the project: jewelry items made from scrap material produced by the project. If you’re interested in contributing, don’t dally: they’ve only got 9 days left to fund the project!

What do you think of the SodaBIB concept? If you’re a roofer or a builder (or even if you’re not), chime in… If you want to learn more, check out what our friends at Triplepundit thought of this project.