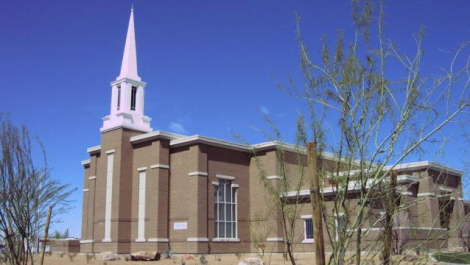 Almost exactly a year ago, I wrote a post for SUNfiltered on the Church of Jesus Christ of Latter Day Saints’ first solar-powered meetinghouse in Farmington, Utah. That experiment apparently went so well that the Church decided to continue down this path: another meetinghouse built to green standards just opened in Mesa, Arizona.

Mormons building green? Aren’t they a particularly conservative lot? Well, yes… but not only does the Church have a fairly long history of applying conservation principles to their buildings, but they also recognize that efficient building standards and renewable power mean long-term cost savings. The Farmington meetinghouse, for instance, produced $5000 in utility savings in its first year. Jared Doxey, director of architecture, engineering and construction for the Church, believes that the savings trend will continue: “As the price of solar goes down, which it’s projected to continue to go down, and as utility rates continue to go up, the viability of solar will become stronger and stronger… It’s definitely is a technology we will be using in the future.”

The New Solar-Powered Building: The Details

The Mesa meetinghouse is the second of three prototypes, and represents some changes to traditional church architecture in order to accommodate green technology features. For instance, there are no sharply sloped roofs; rather, designers used a low-slope (which appears flat) to keep solar panels out of sight. The building also features a rubber membrane white roof that Doxey claims reduces heat gain by 85%. Other green features include:

The church also claims theological grounding for their recent green building choices: Presiding Bishop H. David Burton sees these efforts as a way to “reflect our commitment as wise stewards of God’s creations.” The mix of motivations should create a compelling model for other faiths that see creation care as a part of their mission: they can live their beliefs while also cutting operating costs.

Of course, the Mormons already have many temples and meetinghouses around the country… would love to see retrofitting also come into play (if it hasn’t already).

Got more insight into this development? Find it encouraging? Let us know what you think…

Ready to incorporate solar power into your own lifestyle? We’ve got lots of choices for you… from grid-tie solar systems and solar panels to solar cookers and even sun-powered garden gnomes.

Photo credits: The Church of Jesus Christ of Latter-Day Saints