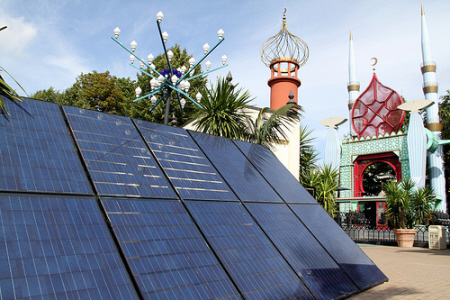 Solar photovoltaic (PV) cell manufacturers produced a record 10,700 megawatts of PV cells globally in 2009—an impressive 51-percent increase from the year before. While growth in 2009 slowed from the remarkable 89-percent expansion in 2008, it continued the rapid rise of an industry that first reached 1,000 megawatts of production in 2004. By the end of 2009, nearly 23,000 megawatts of PV had been installed worldwide, enough to power 4.6 million U.S. homes. Solar PV, the world’s fastest-growing power technology, now generates electricity in more than 100 countries. Made of semiconductor materials, PV cells convert solar radiation directly into electricity. Rectangular panels consisting of numerous PV cells can be linked into arrays of various sizes and power output capabilities—from rooftop systems of one to several kilowatts to ground-mounted arrays of hundreds or even thousands of megawatts. (One megawatt equals 1,000 kilowatts.)

There are two broad categories of PV: crystalline silicon and thin-film. Crystalline silicon cells account for more than 80 percent of the annual PV market. But thin-film PV, a relatively new technology that is less efficient but also less expensive to make and potentially adaptable to more applications, is gaining ground. In fact, First Solar, a thin-film company headquartered in Arizona but with most of its production capacity in Malaysia, was the top PV manufacturing firm in 2009, contributing roughly 10 percent of world PV production.

China produced 3,800 megawatts of PV in 2009, leading all countries for the second straight year. Together China and third place Taiwan accounted for 49 percent of all PV manufacturing, a share that should keep climbing as companies there grow larger and more quickly than competitors based in countries where operating costs are higher. Rounding out the top five producers in 2009 were Japan in second place, Germany in fourth, and the United States in fifth. (See data.) These traditional industry leaders have lost significant market share with the recent ascent of China and Taiwan. Indeed, Japan, which dominated the global market in 2004, controls just 14 percent today.

While China now manufactures more than a third of the world’s PV cells, most Chinese consumers cannot yet afford the technology. Ninety-five percent of its production is exported, much of it bound for Germany, the world leader in using PV. Germany installed a record 3,800 megawatts of PV in 2009, more than half the 7,200 megawatts added worldwide. This brought Germany’s overall PV generating capacity to 9,800 megawatts, nearly three times as much as the next closest country, Spain. Already in the first half of 2010, Germany added another 3,800 megawatts.

Italy was first runner-up in newly installed PV in 2009 with 730 megawatts, more than doubling its total installed capacity. Japan and the United States, third and fourth in both new and overall PV generating capacity, each installed close to 500 megawatts in 2009. (See data.)

World installed PV capacity has grown 16-fold over the past decade in large part due to government incentives encouraging the use of solar power. Although PV production and installation costs have fallen substantially over time, government support will be necessary until solar reaches grid parity (price competitiveness) with heavily subsidized fossil fuels. Incorporating fossil fuels’ largely externalized costs, such as climate change and pollution-related illnesses, into the price of fossil-generated electricity would further accelerate PV’s march to grid parity. The most important solar incentive to date is the feed-in tariff, which guarantees generators of renewable electricity—including homeowners, private firms, and utilities—a long-term purchase price for each kilowatt-hour they produce. This powerful incentive to invest in renewables has now been adopted by some 50 countries, including Ecuador, Israel, Japan, Kenya, Pakistan, Thailand, and most of the European Union. Deutsche Bank estimates that feed-in tariffs had driven 75 percent of world PV installations as of 2008.

Nowhere has the feed-in tariff been more effective than in Germany. In a country that on average receives about as much sunlight as cloudy Seattle, this premium payment for solar electricity has not only spurred Germany to preeminence in installed PV capacity, it has also helped grow a domestic solar industry with more than 10 billion euros ($13 billion) in annual sales.

With PV system prices plummeting, including a 30-percent drop in 2009 alone, the German government announced in mid-2010 that in order to control costs and bring support levels in line with market conditions, it would reduce tariff rates further than the annual cuts originally stipulated by law. While industry stakeholders warn of job losses and reduced demand, the government believes that other changes, including allowing larger systems to qualify for the premium, will ensure further growth. Electricity from PV could reach grid parity in Germany by 2013.

The United States, where total PV connected to the grid is doubling every two years, has no national feed-in policy. Instead, federal tax credits along with various state and local programs, including renewable portfolio standards (RPS) that require utilities to get a certain percentage of the electricity they sell from renewables, have been the main drivers of U.S. PV growth. With an RPS mandating 33-percent renewable electricity by 2020, California has 60 percent of the total 1,260 megawatts of grid-tied PV in the United States. Although this state still leads by a wide margin, others are growing more rapidly. Five states doubled their installed PV in 2009, including Florida, home of the new 25-megawatt DeSoto plant, currently the country’s largest PV park.

While interest in small-scale installations keeps growing in industrial and developing countries, the PV landscape is evolving to include utility-scale, multiple-megawatt solar parks of the DeSoto variety. In September 2010, a newly-expanded 80-megawatt park in Ontario, Canada, overtook a plant in central Spain to become the largest operational PV power plant in the world. Spain and Germany currently account for 8 of the top 10 plants, but that list could soon change dramatically as ambitious projects in other countries come online. China, with scarcely 300 megawatts of installed PV at the end of 2009, has a pipeline of large projects worth a total of 12,000 megawatts. The United States has 23 projects ranging from 100 to 5,000 megawatts under development in the arid Southwest. But these simply scratch the surface of that region’s potential: harnessing a mere 2.5 percent of the annual solar radiation striking the Southwestern land suitable for solar power plants could produce as much energy as the country currently uses.

India also is bidding to become a major player in the solar market, having announced its Jawaharlal Nehru National Solar Mission in November 2009. Named for India’s first prime minister, the Mission envisions 20,000 megawatts of grid-connected solar power and 2,000 megawatts of distributed, off-grid solar installations by 2022. The planned capacity build-out will be roughly half PV and half concentrating solar thermal power, another budding solar technology. If India meets its target, it would be a tremendous boost for a country with vast solar resources but an estimated 400 million people who lack electricity.

Even with the lingering effects of the global recession, more than 16,000 megawatts of PV are slated to be installed in 2010. Germany will likely again account for half of the newly added capacity, as developers rush to finish projects before cuts in the feed-in tariff fully take hold. Beyond 2010, analysts expect annual PV installations to be more evenly distributed among an expanding roster of countries. With costs dropping, economies of scale growing, and governments realizing the benefits of this limitless, climate-friendly resource, the future for solar power looks bright.

Ready to jump on the solar bandwagon? Take a look at our current listings of solar products… from decorative solar fountains and lighting to full-scale grid tie systems.

Image credit: complexify at Flickr under a Creative Commons license