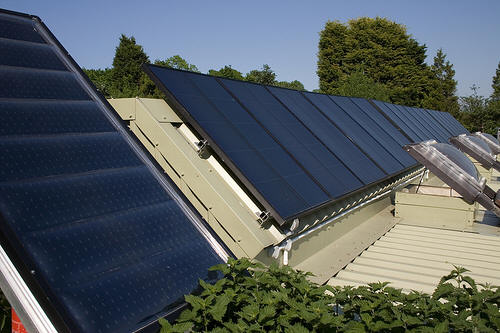 Concerns about global warming, rising fossil fuel prices, and oil insecurity have prompted calls for a new energy economy, one that replaces fossil fuels with renewables. The sun is an enormous reservoir of energy; in fact, the sunlight reaching Earth in just one hour is enough to power the global economy for a whole year. Harnessing some of this energy is an essential component of Earth Policy Institute’s carbon cutting plan, as presented in Chapter 5 of Plan B 4.0. Here are some highlights from the accompanying data on three types of solar energy: solar photovoltaics (PVs), concentrated solar thermal power (CSP), and solar water and space heating.

At the end of 2008, the world had a cumulative total of 15,000 megawatts in PV installations. Though Germany is far from the world’s sunniest country, government policies have made it the global PV leader, with an installed capacity of 5,308 megawatts. Other countries with large solar installations are Spain with 3,223 megawatts, Japan with 2,149 megawatts, and the United States with 1,173 megawatts.

Rooftop solar water and space heaters that directly convert sunlight into heat have been embraced in a number of countries but nowhere as much as in China. With nearly 80,000 thermal megawatts of capacity (enough for 27 million homes), China accounts for two-thirds of the world’s 120,000 thermal megawatt capacity. Turkey comes in at a distant second with 7,100 thermal megawatts. In per capita terms, Cyprus and Israel lead the list with 0.9 and 0.7 square meters, respectively.

New solar thermal power projects, which use mirrors to concentrate sunlight on a liquid-filled vessel to produce steam that drives a turbine, are coming online again after a 16-year hiatus. Since 2006, world capacity has grown by over 450 megawatts to a total of 820 megawatts, enough to power 156,000 American homes for one year. Scores of new projects are in the pipeline. When those currently under construction are completed, the world CSP capacity will increase almost 4-fold. There are an even greater number of projects in the contract or development stages. In the United States alone, projects under development exceed 10,000 megawatts, 20-times greater than the combined capacities of plants currently in operation and under construction.

Avoiding dangerous climate destabilization requires a Plan B: reducing global net carbon dioxide emissions 80 percent by 2020. Achieving this goal requires a transition from fossil fuels to renewable energy from wind, solar, and geothermal sources. Current trajectories, national targets, and available resources indicate that the 100-fold increase for PV and solar rooftop heaters and the 200-fold increase for CSP, as called for in Plan B, are within reach.

You can download our datasets or read the book to learn more about solar power’s role in the plan to stabilize climate.

Try solar power on a small-scale: we’ve got solar-powered radios