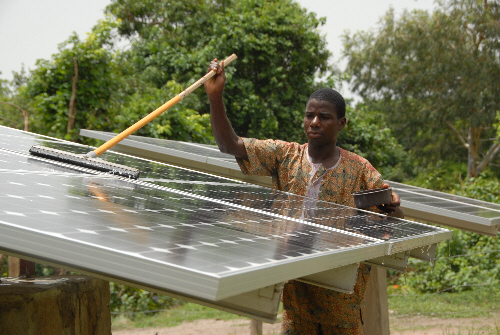 If you live in the developed world, you likely take turning on the lights or the water for granted. So, it may be difficult to imagine the lifestyle (if you can call it that) of people in sub-Saharan Africa without these kinds of luxuries. Lack of infrastructure to deliver these services doesn’t just create inconvenience; it contributes to hunger and lack of economic opportunity. If you’ve got to spend hours each day walking to and from a water source, you’re limited in terms of how much food you can grow, and how much time you can devote to activities beyond mere subsistence.

Just a few years ago, this described daily life for women in the villages of Bessassi and Dunkassa in Benin. With the introduction of the Solar Electric Light Fund‘s (SELF) Solar Market Garden project into these communities, both income and nutrition levels have improved “significantly” in about two years, according to a study by Stanford University’s Program on Food Security and the Environment (FSE).

Because of the lack of infrastructure, people in these villages were at the mercy of weather cycles… so watering crops during the dry season meant making those long trips to water sources, and keeping the plots small. SELF, in partnership with FSE post-doctoral scholar Jennifer Burney, financed and installed “three solar-powered drip irrigation systems in two villages in Benin’s Kalalé district” in 2007. According to Stanford News,  “Each system is used by a local women’s agricultural group, which typically consists of 30 to 35 women who share the maintenance costs of the new irrigation technology.”

In just a year’s time, the solar drip irrigation systems “…supplied on average 1.9 metric tons of produce per month, including such high-valued crops as tomatoes, okra, peppers, eggplants and carrots.” Vegetable intake went up among villagers, and researchers noted a decrease in feelings of food insecurity among the population. And when SELF’s executive director Robert Freling visited the villages in 2009, he saw marked improvement in physical well-being, especially among women.

The installation of these systems not only improved food access for these people, but increased their income. The average income in the area of Benin is $1.25/day; women participating in the study increased their weekly income by $7.50. Burney tells a story that makes that difference more vivid:

The most significant moment for me came late one afternoon when Yarou Ganni, a member of the women’s farming cooperative, stopped me and invited me to join her family for a meal. She told me, “For so many months, you have been coming here, and I never had any money to buy any pounded yam to thank you. Now, after what we have sold, I can finally make you dinner. So sit down. You’re not going anywhere.”

The systems funded by SELF aren’t cheap: they cost about $18,000 to install, and require around $5,750 in annual maintenance. There are cheaper systems that run on diesel, kerosene, or gasoline. Of course, if you have to walk to get water, you can imagine the difficulties in obtaining these fuels. Regardless of the upfront costs, though, these systems should pay for themselves in 2.3 years because of increased earnings by the farmers.

Five years ago, Jamais Cascio at Worldchanging noted the “life-saving” potential for solar development in Africa: by “leapfrogging” over fossil-fuel based technology, Africans could raise their standard of living without marked increases in greenhouse gas emissions. The Solar Market Gardens project in Benin is small in scale, but provides an inspiring example of that potential.

Know of other such projects using solar or other renewable technologies to raise living standards in the developing world? Share them with us…

Images courtesy of SELF