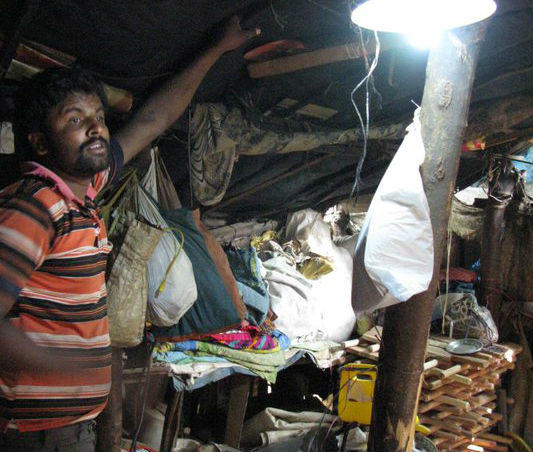 Have you priced a solar energy system for your home lately? While new incentives and financing options make solar power more attractive than ever, purchasing a system isn’t cheap: you’re still looking at $20,000 minimum in most cases (before incentives, of course). Now, imagine you’ve never been able to afford electricity for your home, and trying to make ends meet on less than $10 a day. A solar system, even a small one that could run a light, and maybe charge a phone, could easily create a ton of opportunity for you and your family… but there’s no way you can afford to purchase one.

400 million people – more than the entire population of the United States – live in such circumstances in India. In spite of these overwhelming numbers, the country’s current prime minister, Narenda Modi, wants all of them to have access to solar power in the next five years… at least enough to power a light bulb. Given the economic circumstances of these people, that sounds like a tall order… as long as these people believe purchasing a solar panel or system is their only option. But just as in Central America and Africa, a different business model can make solar available to India’s most impoverished citizens.

We associate “pay as you go” with cheap cell phone access, but, as we’ve shown before, this model is working for electricity in the developing world. In India, the poor have access to energy either with wood or with diesel. Both are dirty, unhealthy, and expensive in terms of either time or money. Simpa Networks, an Indian company, sees an opportunity to provide its fellow citizens with clean electricity through a pay-as-you-go model. A simple solar system that could power a few lights and a phone charger would run about $300-400 retail, but the company can provide them to its fellow citizens “if only they could pay for such a system over time, in small, irregular, and user-defined increments.”

That’s where pay-as-you-go comes in. A user can purchase credits for a system stationed on their home, and make use of that power when s/he needs it. Need lights to cook a meal, or study for an exam? Need to make sure your cell phone – the source for communication and online economic activity for people in the developing world – is charged for the next day? Use some of the electricity for which you’ve already paid. When you run out of credits, you can purchase more… all on your cell phone.

While leasing plans are facing numerous obstacles here in the US, especially as the costs for solar panels continue to drop, such an arrangement makes perfect sense in the developing world… and can help lift people out of poverty by providing access to one of the necessary tools of empowerment: energy.

Know of a solar energy company doing similarly innovative work in the developing or developed world? Share their story with us…