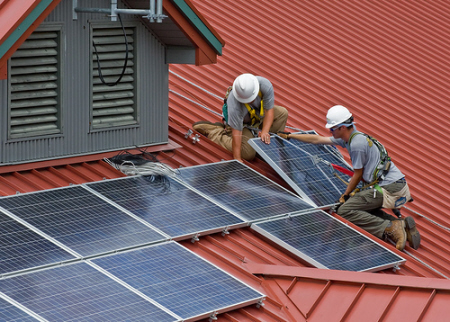 Solar power as we know it has been around for almost a century. Many people believe that its still the same basic technology that helped power early spacecraft and the White House in the 1970’s. But advancements over the past 10 years have brought solar to the cutting edge with new investment and an emphasis on research. Here are three solar innovations that are making this type of renewable energy more affordable, easier to obtain, and more efficient for generations to come.

1. Thin-Film Cells Will Cut Solar Power Costs in Half

When most people picture solar panels, they think of the large black cells with aluminum framing that resemble windows. These are crystalline panels and have been used for decades. The problem with them is that they are time and energy consuming to make. Similar to the process for making silicon computer chips, the manufacturing process requires highly trained technicians, clean rooms, and energy-gobbling machinery.

Thin-film solar is a completely different take on solar cells. The cells themselves often come in a roll and the manufacturing process is similar to a printing process. This is dramatically reducing the cost of solar power. Panels in using traditional crystalline technology still cost in the $2/watt range. Thin film cells cost closer to $1/watt and that price is falling quickly.

Thin film cells are being consumed in large quantities by utility scale projects now, making it difficult for consumers to get their hands on them. This is changing daily though as nearly every major solar manufacturer has a thin-film model coming out, which will make it easier for the average homeowner to have this exciting new technology. For more information visit First Solar, the premiere manufacturer of thin film solar cells.

Inverters are usually an essential piece of a solar power system. An inverter takes the power that comes from the panels, which is direct current (DC), and changes it into alternating current (AC). AC is what we have in our outlets at home and work and is what most appliances need to operate. The inverters of the past were large, expensive, and generated large amounts of waste heat. The cheapest inverters cost around $3000, which meant that the cheapest solar power systems were in the $10,000 range.

Microinverters have changed everything. Now, for less than $200, you can have an inverter on each solar panel, and have a system that consists of one solar panel if you wish. That means the entry point for installing a solar power system is now as low as $1000. Many people start with one or two panels, and add on a panel or two each year (its a great idea to do this on Earth Day and make it a learning activity for the kids).

They also dramatically increase the efficiency and decrease the installation time for solar power kits. In the not so distance future there will be microinverters integrated into the actual construction of the panel, which means, at long last, you may just be able to plug your solar panel right into the wall. Visit Enphase Solar for more information on microinverters.

Most people would be surprised to learn that at least 25% of the equipment cost, and 75% of the labor cost of solar kits go into the racking that holds the solar panels. This technology in particular has not changed significantly in 100 years. The process of mounting bolts into the roof surface, rails to the hold the panels, and wiring and grounding systems was time consuming and dangerous.

Now we are finally seeing some new options in racking for solar. The new equipment eliminates the rails and grounding equipment and can be installed in less than half the time of traditional racking systems. Check out Zep Solar for more information.

Solar costs have already come down by as much as 50% in the past 5 years. Over the next decade, prices should come down even more dramatically, thanks to a renewed interest in this promising technology. Before long solar power will achieve the holy grail: compete with fossil fuel generated power, without government incentives.

Kriss Bergethon lives off the grid with his wife and family. For more information visit Solar Panels.

Looking for cheap and easy ways to go solar now? Check out our selection of solar lights, solar batteries, and solar fountains for the yard.