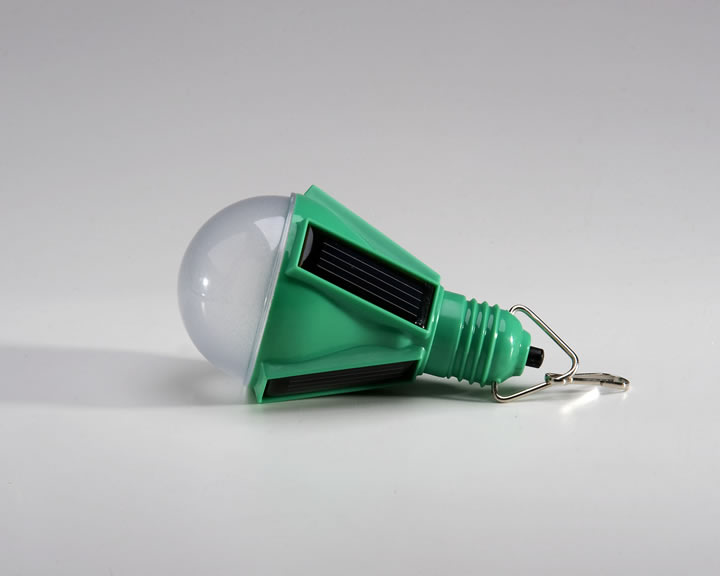 What do ski risers, ceiling bike storage, goggle fans and solar-powered light bulbs have in common? Stephen Katsaros. He’s an entrepreneur and inventor from Denver, Colorado with a knack for getting things done, as evidenced by the quick conception in January (and birth in July) of the Nokero Solar Light Bulb, with which Katsaros plans to replace the toxic fuel that one-quarter of the world still uses for lighting.

The Nokero is the world’s first solar-powered light bulb and, while it may sound strange to adorn a single light bulb with solar panels, the Nokero is easy and fast to produce and retails at only $15. Purchased in bulk, the bulbs cost only $6 each. Sure, that $6 is a three-days-wages investment for someone living off $2 per day, but it’s easily worthwhile when compared to the monthly cost of kerosene fuel, not to mention the negative health effects and fire risks inherent to burning toxic fuels indoors.

Katsaros’ solar bulb, which is already finding its way into 33 countries, is made from impact-resistant plastic and is also rain-proof. Each contains five LED lights*, as well as a special computer chip designed to prolong battery life. Four small solar panels* charge the bulb, which can provide over four hours of lighting on a full charge.

One factory in China is all set to manufacture between 600,000 and 1.2 million Nokero bulbs for sale, primarily in Asia. According to the Denver Post, the average kerosene fuel-burner spends 5 percent of their annual income on fuel. Assuming an income of $2 per day, the Nokero bulb, which should last five years, would only cost about 2 percent of income in the first year, and nothing for the remaining years of operation.

Lighting Up the Developing World through Social  Entrepreneurship… Maybe…

That appears to be a sweet deal, and must be a big reason why Katsaros has been able to turn his invention from idea to reality in such a short time, but don’t doubt for a second his capitalist notions. Not to diminish Katsaros’ good intentions in creating a renewable product to replace a dirty, carbon-emitting tradition, but as he stresses, “This is not a charity. We are using capitalism as a method to improve people’s lives.”

For instance, as helpful as the Nokero might be in many areas of Africa, most notably Ethiopia, it will not be introduced there immediately because consumers there are too poor to afford even a $15 light bulb. Instead places like India, Indonesia, Nigeria and Pakistan will be targeted. In these countries, hundreds of millions of people live without electricity but could still afford the Nokero lamp.

Yet it is this model — asking the poor what they need and trying to deliver a product at an affordable price — that will also create revenue for the company catching on to the new era of “social entrepreneurship.” In other words, and to put it matter-of-factly, it’s OK to profit off the poor as long as your product beats out the alternative, especially if your product is itself an alternative to a dangerous and environmentally hazardous fossil-fuel power.

It’s pretty hard to have a problem with that, although I’d give the Nobel Prize to organizations like Solar-Aid and the Solar Electric Light Fund (SELF) who are out there, without profit in mind, providing light to the world’s poor.

Still, a tentative cheers to Stephen Katsaros, obviously an incredibly clever fellow, and his solar-powered light bulb. That toast is only tentative because we have yet to see whether this product, which was obviously rushed to production, is really worth its salt or whether millions of the world’s poor will be left $15 in the hole with a piece of useless plastic.

Case in point: After the Denver Post piece, the five-year battery life Katsaros apparently reported to the newspaper seems to have been reduced to “two-plus years” on the Nokero website. Just further evidence that the full story on the Nokero light bulb is not yet out.

Dan Harding is a well-versed veteran of solar critique, commentary and reporting. CalFinder’s home solar power site is proud to tout Dan as their solar expert. He has published over 1,000 articles on a wide variety of solar industry topics, ranging from cutting-edge technology and gadgetry to political satire and powerful editorials.

No solar light bulbs yet, but we do have plenty of other solar products… from grid tie solar kits to solar lighting to solar fountains.