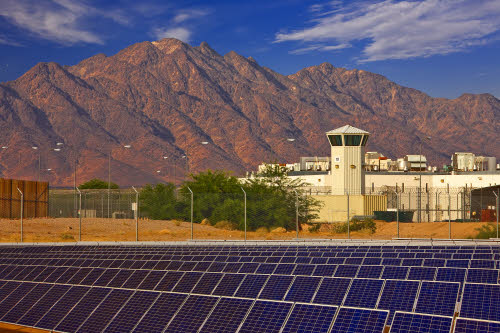 Prisons are a necessary component of modern society, but even the most die-hard “get tough on crime” proponent doesn’t want to spend a ton of money on them.  So, where do you keep costs down? Guards? Buildings? Cutting most categories of spending probably also means cutting security at some level; energy, however, represents a significant source of savings without undermining a prison’s purpose. California’s Department of Corrections and Rehabilitation may have implemented a model for the rest of the country: a multi-institution solar power purchase agreement.

Created in partnership with SunEdison, the solar energy component of the “CDCR Goes Green” program not only creates environmental benefits, but also cost savings for a state that’s been hit hard by the economic downturn. Since 2006, the program has installed solar systems at five state prisons: California Correctional Institution, Chuckawalla Valley State Prison, Ironwood State Prison (pictured above), North Kern State Prison, and Los Angeles County. Expected savings vary by source, but they’re substantial in any case: $45-57 million over the 20 year contracts.

The beauty of this arrangement is that the state didn’t have to pony up a large initial investment: SunEdison installed the panels on marginal lands near the prisons, owns them, and maintains them. The CDCR simply agrees to buy power at a set rate for the term of the contract. For details on the cost savings and environmental benefits created by each installation, take a look at the CDCR’s data set on the solar program.

Hard to see this as anything other than a “win-win”; I’m sure we’ll continue to see these kinds of energy contracts put in place by large institutions. Know of another one that’s working well? Let us know about it.

via SunEdison and Correctional News