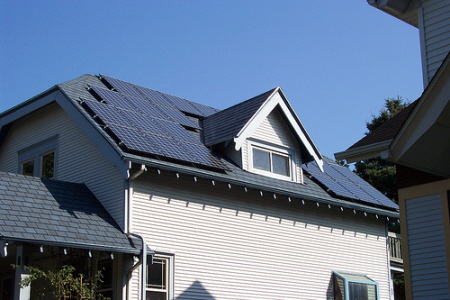 Solar photovoltaic (PV) companies manufactured a record 24,000 megawatts of PV cells worldwide in 2010, more than doubling their 2009 output. Annual PV production has grown nearly 100-fold since 2000, when just 277 megawatts of cells were made. Newly installed PV also set a record in 2010, as 16,600 megawatts were installed in more than 100 countries. This brought the total worldwide capacity of solar PV to nearly 40,000 megawatts — enough to power 14 million European homes. Made of semiconductor materials, PV cells convert solar radiation directly into electricity. Rectangular panels consisting of numerous PV cells can be linked into arrays of various sizes and power output capabilities — from rooftop systems measured in kilowatts to ground-mounted arrays of hundreds or even thousands of megawatts. (One megawatt equals 1,000 kilowatts.)

There are two main types of PV — traditional crystalline silicon and newer thin-film PV. In 2010, crystalline silicon production was more than double the output of 2009, accounting for over 80 percent of all PV produced. While thin-film production did not keep pace, it still grew by more than 60 percent. First Solar, a U.S. firm, maintained its leadership role in thin-film production, accounting for over 40 percent of world output, most of it produced in Malaysia.

Data provided to Earth Policy Institute by GTM Research show that Chinese manufacturers again dominated the global industry in 2010, with close to 11,000 megawatts of PV cell production. (See data at www.earth-policy.org.) This was the seventh consecutive year in which China at least doubled its PV output. Taiwan was a distant second with 3,600 megawatts produced, followed by Japan with 2,200 megawatts, Germany with 2,000 megawatts, and the United States with 1,100. The top five countries thus accounted for 82 percent of total world PV production.

While Germany ranks fourth in solar cell manufacturing, it towers above all other countries in terms of actual electricity generation from solar panels. Germany has widened its lead in this category each year since overtaking Japan in 2004 and, after adding 7,400 megawatts in 2010, now boasts 17,200 megawatts of installed PV. This is more than 40 percent of global capacity and over four times the 3,800 megawatts in Spain, the number two country. PV in Germany now generates enough electricity to meet the power demand of some 3.4 million German homes. Japan installed close to 1,000 megawatts of new PV capacity in 2010. It is the third-ranked country in installed PV, with a total of 3,600 megawatts. As solar adoption accelerates in Japan, its national target of 28,000 megawatts by 2020 may be easily surpassed, especially as the country weighs energy alternatives following the March 2011 Fukushima nuclear disaster.

By nearly doubling its total PV power capacity in 2010, Italy vaulted past the United States to claim the fourth position in the world solar rankings, with 3,500 megawatts. With an expected 8,000 megawatts of new PV in 2011, likely overtaking Germany in new installations, Italy will have already exceeded its official 2020 goal of 8,000 megawatts. Enel, Italy’s leading utility, sees the country reaching 30,000 megawatts by 2020 — enough to satisfy half of its current residential electricity needs.

PV capacity in the United States also saw strong growth in 2010, increasing by more than 50 percent to reach 2,500 total megawatts. California, which now has more than 1,000 megawatts connected to the grid, again led all states in new PV installations. But a number of other states, including New Jersey, Nevada, and Arizona, are ramping up their solar capacity as well, driven by programs and incentives at the state and federal levels.

Until very recently, China’s status as PV manufacturing powerhouse had not translated into much solar generation at home, as panels were seen as too expensive in the domestic market. While the vast majority of Chinese-made PV is sent abroad, a growing government commitment to increasing solar power as part of the energy mix is now catalyzing substantial PV capacity gains. Total installed PV in China grew 140 percent to nearly 900 megawatts in 2010. This was the first full year for the national Golden Sun program, which covers half the investment and grid connection costs of a solar project. It is expected to result in at least 1,000 megawatts of new installations each year after 2012.

Furthermore, in August 2011 China’s main economic planning agency announced it was implementing a national PV feed-in tariff. This policy tool, now used by more than 60 countries, is behind most of the PV already installed worldwide. A feed-in tariff typically guarantees generators of renewable electricity a long-term purchase price for each kilowatt-hour they produce and “feed into” the grid, providing a powerful incentive for installing such systems. Together the Golden Sun program and the new feed-in tariff are likely to push China’s PV capacity to at least double again in 2011 — and may help explain why the country’s solar power targets for 2015 and 2020 have reportedly risen to 10,000 and 50,000 megawatts, respectively.

Although the cost of PV has fallen substantially over the decades, solar-generated electricity is not yet widely price-competitive with electricity generated by heavily subsidized fossil fuels. If the full cost of burning fossil fuels, including health effects and the costs of climate change, were incorporated into the price of electricity, PV would quickly be revealed as one of the least expensive sources of power.

As system costs continue to drop, the PV landscape is evolving to include not only traditional small-scale PV installations but also utility-scale parks of tens, hundreds, or even thousands of megawatts. An 80-megawatt PV park completed in Canada in 2010 was the world’s largest until September 2011, when a newly-expanded PV complex of close to 150 megawatts in northeastern Germany claimed the title. As of late 2011, the United States had 48 PV projects of 100 megawatts or more in the pipeline, including a 5,000-megawatt park to be sited on degraded farmland in California’s San Joaquin Valley. At peak generation, this solar facility’s electricity output would rival that of five large nuclear power plants.

Part of the National Solar Mission’s PV expansion is destined for rural areas where millions lack access to electricity. As is the case in many other developing countries, there is vast potential in India for PV to provide power in places without an electric grid. Installing small solar systems on homes is often much less expensive than building a central power plant, with the added benefit of greatly reducing indoor air pollution from kerosene lamps.

Industry analysts forecast that some 21,000 megawatts of PV will be installed globally in 2011. This would be a marked slowdown from the doubling of the market in 2010, but the pool of countries with rising demand for PV still continues to grow. New markets such as Slovakia and the United Kingdom are among the 20 countries expected to add 100 megawatts or more in 2011, up from 13 countries in 2010.

As PV costs drop, as concerns about climate change grow, and as countries look to replace finite fossil fuels with energy sources that can never run out, the growth in solar power should continue. The potential is practically without limit: a 2011 article published in Energy Policy shows that solar PV deployed in suitable locations could generate 30 times the electricity currently produced worldwide.

Image credit: mjmonty at Flickr under a Creative Commons license