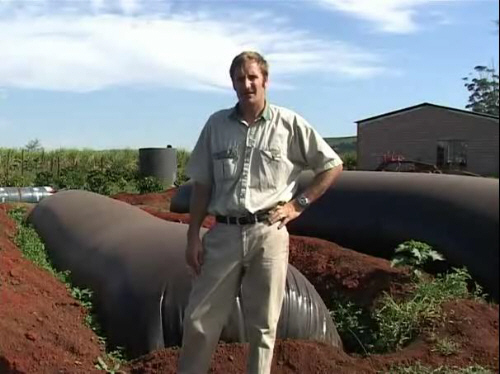 Chicken poop ain’t pretty, but it’s potential as an energy source has a number of large-scale poultry operations taking a second look at the smelly stuff. The price tags on such projects can climb pretty high, though: Georgia’s Green Power EMC project, for instance, was projected to cost $20 million when announced in early 2006. These costs may make such projects prohibitive in the developing world, where they could raise living standards of impoverished people while helping them “leapfrog” over Western development patterns based on fossil fuels. South African farmer Shelby Tyne (shown above) believes he’s hit upon the cost-benefit sweet spot for this technology: for $37,000 dollars, Tyne and partner Derrick Hilton have built a biogas plant that powers the entire farm… without even pushing maximum capacity.

Tyne tells the story of the biogas plant in this Facebook video (note: you do have to be a member of Facebook to watch it). His and Hilton’s Greenways Farm had taken chicken poop off of a neighboring farmer’s hands for a number of years to use as fertilizer, but stockpiling the litter created pollution problems. Tyne’s solution: put the poop into methane digesters, and use the resulting gas as fuel for both cooking stoves and a generator. He quickly figured out that with the amount of chicken litter they normally used, the farm could create 11,000 kW h of electricity per month: more than three times what it normally consumed. On paper, the project looked like a no-brainer.

When Shelby contacted me last week, he didn’t spend a lot of time explaining the technical details of the plant: he let the video do that (and so will I). Rather, he made the case that his model could provide an affordable power generation option for developing areas of the world, or even for farmers in the developed world struggling to make ends meet. Given the overall simplicity of the design, it’s hard to see how that’s not a safe assumption. One thing he did ask me (and I’ll pass on to you): would his design meet minimal environmental standards in places like the US? I couldn’t say one way or the other, so I’m interested to hear what you think.

I do think that the Greenways Farm biogas plant has real potential as a model for other parts of the world. Tyne used common materials (i.e., the digesters themselves are made from tarpaulins), and the engineering looks pretty basic. And, of course, chicken poop isn’t requirement: almost any kind of animals waste (including carcasses) could feed the digesters. I remember that Jeff Goodell, in Big Coal

, told the story of a remote Chinese farmer using a small methane digester to create gas for cooking. Is this technology, when developed on an appropriate scale, a potential world-changer for the poor?