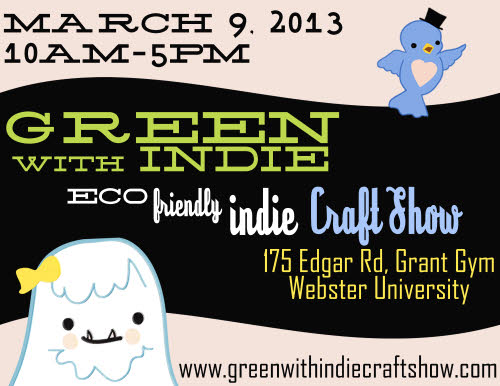 Along with standout prints and bold colors, “green” will be the hottest trend at the Green with Indie Craft Show (GWI), St. Louis’ only eco-friendly indie craft and art show. Every item on display will be an entirely original creation made from recycled, upcycled and refurbished materials.

Now in its third year, this St. Louis Craft Mafia-organized event will showcase an impressive array of vendors offering one-of-a-kind treasures for everyone, including upcycled vintage and modern jewelry, crushed recycled glass sun catchers, bird feeders made from teacups and saucers and so much more.

While loading up on unique finds, you also can enjoy yummy sandwiches and smoothies made by Urban Eats Café and other good eats by Lulu’s Local Eatery, which uses all-natural, organic and local ingredients in every dish. And to satisfy your sweet tooth, there’ll be hand crafted, artisan treats from Oh Sheila! Chocolates and The Retrailer available for purchase.

Don’t miss out on this FREE, family-fun happening taking place on Saturday, March 9 from 10 a.m. to 5 p.m. in Webster University’s Grant Gym. Check out my interview with GWI organizer, Holly Schroeder, for the inside scoop about some of the additions to this year’s show. 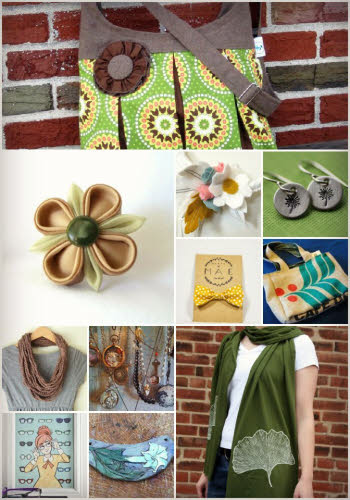 Talancia Pea: Congrats to the St. Louis Craft Mafia on another successful year of planning the GWI craft and art show. How do you think the event has expanded and evolved since its’ beginning in 2010?

Holly Schroeder: Every year we have been able to add in some new extras in addition to the previous year’s shows. This year there will be a do-it-yourself (DIY) project station, a DIY gift wrap station, and a woodland themed photo booth to capture the day’s fun!

TP: How did you all decide on choosing the Craft Yeti, an abominable snowman-type figure, as this year’s mascot?

HS: Craft Yeti was the result of a (St. Louis Craft) Mafia brainstorming session. April, one of our fearless leaders, brought her to life in 3-D with her sewing machine.

TP: The Craft Yeti can be timid and reclusive at times, but will she make an appearance at the craft show for pictures and/or autographs?

HS: Craft Yeti can be a bit shy and elusive, but we hope that she will make an appearance or two during the show.

TP: Just for fun, complete this sentence: _______is the last thing I bought from a thrift store.

TP: As one of the few indie craft events in the Midwest, what advice would you give to other crafters hoping to organize a similar event in their city or town?

HS: Every city has a great pool of crafters and artists to tap into. Look for opportunities to connect with local craft groups and don’t be afraid to issue an upcycle challenge to encourage participation.

Be sure to visit GWI’s Facebook page to learn more about the many informational booths that will be set up throughout the day covering everything from growing organic food at home to making reconstructed clothing from vintage and used thrift store finds!