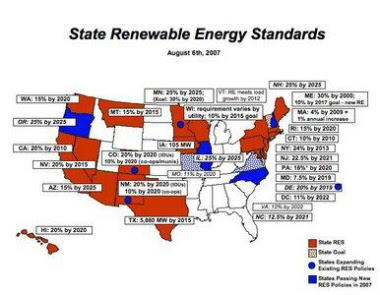 Saturday’s passage of the energy bill in the House of Representatives was a major step forward, and the inclusion of a renewable energy standard (or RES) of 15% by 2020 was just one reason. The bill faces long odds of surviving intact with the need to reconcile it with the Senate version (which didn’t contain the RES), and President Bush’s threat of a veto, but the 220 representatives who voted for the bill deserve congratulations (and thanks!). It’s good to see this kind of energy in Washington (yes, that’s a pun… a bad one).

As It’s Getting Hot in Here pointed out today, though, the Feds are way behind when it comes to implementing requirements for electricity production from renewable sources, as half of the states have already, or will very shortly, enact renewable energy standards. Illinois was one of the most recent: according to blogger Jesse Jenkins,

The Illinois General Assembly on July 26 passed energy legislation that includes a renewable energy standard (RES) of 10% by 2015 and 25% by 2025, according to WindEnergyWeekly.

The bill passed the House 80-33 and the Senate 40-13 and Governor Rod Blagojevich (D) is expected to sign it soon.

Although the Illinois RES applies to all utilities, the state has a competitive electricity sector and about half of the state’s electricity customers are supplied by “alternative retail electricity suppliers” (ARES), which are not yet covered by the RES.

At least 75% of the standard must be met with wind resources and eligible resources must come from within Illinois initially and may come from Illinois or neighboring states after 2011.

So, yeah, it looks like there are some loopholes that need some tightening there; nevertheless, this should be major: Illinois’ market is the fifth largest in the nation, according to WindEnergyWeekly.

Sadly, in Missouri, we’re a bit behind: Jenkins also notes that we’ve set “targets” for renewable production of 11% by 2020, and that utilities must make “good-faith efforts” to meet these targets. Last year, there was an effort made to enact a true RES; it got shot down in favor of the “targets” bill. On the upside, we did pass true net metering this time around…

Back to the bigger picture, though: will Congress have the vision to do what half the states have done already? Or, does that fact lessen the need for federal action? I’m guessing many utilities would like the federal standard, not only because it sets a lower goal (which I’m assuming would override state initiatives), but also because it creates a uniform standard. On the plus side, though, it would show some national resolve for moving towards a cleaner energy future. Still, I’m tempted to say let the states continue what they’re doing, as they’re setting more ambitious goals, and focusing on the energy sources that will serve them best (i.e., wind in Illinois). The feds may not catch up… but maybe we won’t need them to do so…