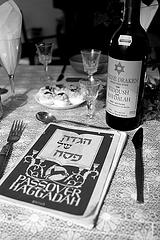 Spiritual practices often make use of powerful symbols to stir people into action.

Earth Day fell during Passover this year causing Jews to reflect on how an important tradition offers some wisdom about environmental challenges. Rabbi Jeff Sultar, director of The Green Menorah Program at the Shalom Center, took the three necessary elements of the Passover Seder and used them to symbolize the struggle with personal, economic, or political “pharaohs” putting limitations on a healthy planet.

This is a creative use of religious symbolism to raise voices against environmental injustice.