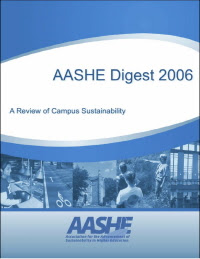 As regular readers know, I left higher education professionally (well, mostly), but still try to keep a close eye on what’s happening at campuses around the country in terms of sustainable development. I’m in heaven now, as the Association for the Advancement of Sustainability in Higher Education (AASHE) has released its AASHE Digest 2006: A Review of Campus Sustainability (in PDF). The digest is a compilation of all of the campus sustainability stories that appeared in the AASHE Bulletin during 2006, and provides a good look at the trends for the year. According to the “2006 in Review” section, last year was a watershed. Among the findings of the report:

This is just a handful of the milestones the Digest notes for last year. And, the pace continuing: according to AASHE’s Executive Director Tom Kimmerer, “If the first two months of 2007 are any indication, we are heading for another vigorous year.”

The Digest is categorized by specific impact areas, such as “Green Building,” “Food and Agriculture,” and “Transportation.” The PDF format makes it easily searchable, so you can find out how your alma mater did last year. I did that myself; unfortunately, the schools I’ve attended or taught at didn’t make the Bulletin last year. That doesn’t mean that they’re not implementing sustainability at some level, but, rather, they weren’t doing anything last year, or they did, and AASHE didn’t cover it (which I think is pretty unlikely).

Regardless of your own school’s efforts (or lack thereof), the bigger trends are looking very promising. And that’s good news, as it means more students are graduating with a clearer sense of their impact on the natural world, and what they can do to lighten it.

Thanks, as always, to Julian Dautremont-Smith of AASHE for passing along the news.