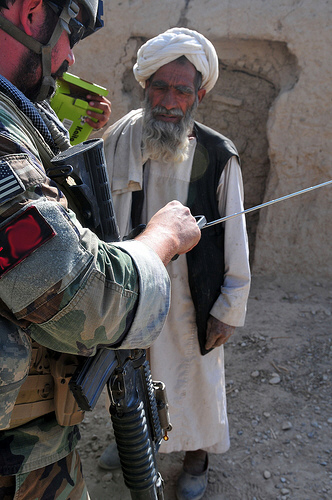 No doubt, today’s kind of an odd day to be discussing new thinking on national security, as the US (and much of the world) is celebrating the killing of Osama bin Laden largely through the security infrastructure we’ve built up over the past 60 or so years. But a post from Grist’s Glenn Hurowitz got me thinking about the larger implications of this event… and a new document I’d heard about last week. “A National Strategic Narrative” by Capt. Wayne Porter (US Navy) and Col. Mark “Puck” Mykleby (US Marine Corps) got a little bit of attention, but not much. After taking some time to read it this morning, I realized that it, like Hurowitz’s post, put the events of the last 24 hours, as well as defense and national security issues of the last few decades, into a compelling context.

Given the thrust of the work we do here, you might expect that this paper, written under the collective pseudonym Mr. Y, focuses on the security threats posed by environmental challenges. You’re right… to a degree. Porter and Mykleby do make ample references to security threats posed by climate change, food insecurity, and competition for resources… but that’s only a part of the picture. The larger context for their new narrative (which they compare to our Cold War-era strategic story of “us against them”) is the global security ecology, which involves not only access to natural resources, but also trade and economics, technology, and human welfare. In short, the authors argue for “sustainment” (rather than “containment”) as the hallmark of security in the 21st century: yes, prudent use of resources, with a preference given to those that are renewable, but also economic security, political and cultural engagement, and competition focused on positive sum outcomes.

I won’t rehash the whole paper… you can read it for yourself (it’s relatively brief, and quite accessible to those of us who aren’t security scholars). It did get me thinking about the context in which those of us in the environmentalist community argue our positions, and how we can (better?) frame those issues in terms of security.

For instance, Porter and Mykleby bring up energy at numerous point throughout the paper. We’re all aware that at least part of our motivation for military action over recent decades stems from access to conventional energy sources… oil among the most important. We know that our dependence on oil supports both authoritarian regimes in various parts of the world, and terrorist organizations. We also know that widespread use of oil and other fossil fuels contributes to climate change, which creates ecological instability, and that ecological instability can lead to political and social instability as parts of the world have a harder time feeding themselves, getting access to drinking water, and creating economic opportunities. People facing these challenges are the most susceptible to radicalization: it’s easy to start hating and blaming those living in abundance when you feel like it’s not available to you.

But, if we focus on developing renewable energy resources, we change the story entirely. Nations don’t have to compete for access to sunlight, the wind, or tides (though they will compete in terms of technology development for harnessing these resources). Dictators can’t exercise dominance over these resources since they don’t have to be harvested or implemented through centralized systems. The ability to harvest such resources on a widespread basis creates economic opportunity, and motivation for education. Little reason exists for one tribe or nation to see another as threat through control of energy sources.

I may be oversimplifying — feel free to tell me if that’s the case — but that the train of thought Porter and Myckleby led me towards. Ultimately, the authors argue for systems thinking as the context in which we consider national security… and that considering interconnections — political, social, and environmental — lead us towards very different ways of thinking about the meaning of security, and the means by which we achieve it. Using resources more wisely, investing in education, and supporting more sustainable mean of economic competition aren’t just feel-good concepts; rather, they’re the foundations of US and global security.

I don’t know if either of these authors have read any of Lester Brown’s works, but “A National Strategic Narrative” certainly read like something that could’ve been influenced by World on the Edge, or another of his works. Regardless, I hope more people read this paper, and begin to discuss its implications… it deserves attention.

Read “A National Strategic Narrative?” Let us know what you think… no reason we can’t start at least one discussion here.

Image credit:isafmedia at Flickr under a Creative Commons license