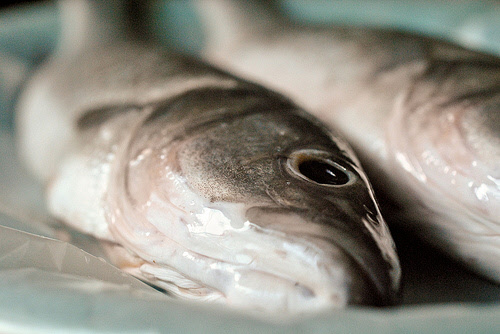 Ever eaten a whole fish? No doubt you’ve probably been served one at some point, but you probably didn’t eat everything: the head, fins, and bones stayed on your plate. Food writer and former Alaska fisherwoman Maria Finn thinks that’s wasteful; furthermore, she sees that waste as symbolic of how we treat our fisheries and marine life generally. Her new book The Whole Fish: How Adventurous Eating of Seafood Can Make You Healthier, Sexier, and Help Save the Ocean (affiliate link) covers a wide range of concerns surrounding seafood sustainability in a short “TED book.”

While Finn has written in many styles and genres, she’s primarily an essayist… and The Whole Fish reads very much like a work of creative non-fiction. Yes, there are lots of facts here on topics ranging from the life cycle of Alaskan salmon to the importance of forage fish in our diets, but Finn presents them very conversationally. There’s a meandering quality to the text, which is occasionally a little frustrating… but once you catch on, it makes for a pleasant read. Just keep in mind that this really isn’t the “how to” book suggested by the title: yes, those topics are covered, but like a good classical essayist, Finn plays with ideas throughout the book rather than just presenting them in the straightforward manner. 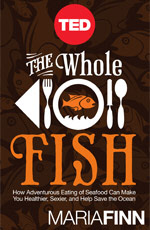 That doesn’t mean that there isn’t practical information in the book; rather, it’s presented more poetically than most works of non-fiction. Finn does review, for instance, species of salmon (including information on which ones best serve your sexual health). The final section contains recipes for using the whole fish: from smoked salmon bones to “fishy chips” (whole fried anchovies), there are lots of options here for adventurous eaters… or even those who aren’t so adventurous. And her discussions of fishing practices and fish farming (both the sustainable and not-so-much kinds) will help you make better choices at the seafood counter.

As advertised, this TED book is perfectly appropriate for reading in one sitting (though a relatively long one). You will have to read it on-screen, though, as its only available in electronic editions (one of the other characteristics of TED books). If you’re concerned about fisheries and marine life, or want to get more fish in your diet, The Whole Fish is definitely worth the time you’ll spend reading it.

Have you read The Whole Fish? Let us know what you thought…