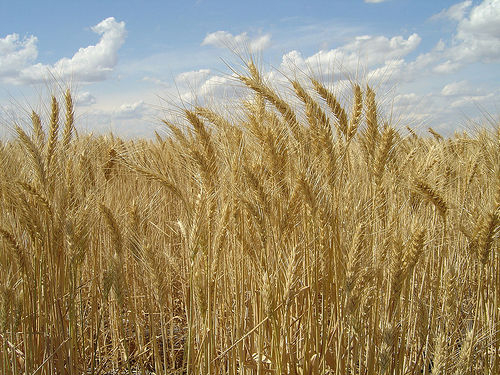 Last week I had the honor of meeting Dr. Jason Clay, Vice President of the World Wildlife Fund.  We were on the same panel at CropLife America’s second annual National Policy Conference.  Jason got the opportunity to promote his main project which is influencing major commercial entities in the food chain to promote intensification of agriculture in ways that are good for both the environment and the food supply.  You can get the whole story behind this excellent WWF effort by watching Jason’s TED Talk.

For many years the promoters of “sustainable agriculture” have made the purely philosophical assumption that sustainable means “low input” and thus they favored things like Organic production.  What groups like WWF have realized is that if we are going to be serious about protecting wild habitat to maintain biodiversity, we need to grow more of our food on the land that has already been converted to farmland so that we can meet global demand without destroying the remaining wild lands.

In this post I’d like to talk about a perfect example of sustainability through intensification that can be observed from historical data available from the USDA-National Agricultural Statistics Service (USDA-NASS).   When biotechnology was introduced in Corn, Soybeans, Cotton and Potatoes in 1996, Wheat became even more of an “Orphan Crop” than it already was.  In many areas its planting declined as the other crop options became more attractive to farmers.  When biotech wheat was successfully blocked by a GreenPeace-driven scare campaign in Europe and Japan, wheat farming suffered even more.  I have tried to calculate that loss in a post called “The Cost of Precaution.”

Going Against The Grain In Northwest Minnesota

However, the wheat growers of Northwest Minnesota (and also other areas) responded to all these economic drivers with a classic example of “agricultural intensification.”

From talking with dozens of wheat farmers over the years I have learned that there are two perfectly viable economic strategies for growing wheat.  One is a “low intensity, low risk” approach.  The grower uses a minimal seeding rate (~60 lbs/acre) of “saved seed” which is just part of last year’s harvest, maybe given a cheap seed treatment.  There is a single fertilizer dose at planting, little to no herbicide use except to burn down the weeds/cover crop, and no fungicide or insecticide sprays during the season.  The yield is low but so is the investment.  If the crop is wiped out by hail or Fusarium head blight the farmer had only limited financial exposure.  This approach works for growers.

A “high intensity” approach by US standards (European wheat growing is far more intensive”) means buying ~90lbs/acre of certified seed, giving it an elite seed treatment, using a selective herbicide instead of tillage, doing a “split application” of the fertilizer with a larger total quantity, and making a fungicide application at flag leaf stage and/or flowering to reduce disease damage.  Wheat yields in this scenario are typically 2 times as high as with the low intensity strategy (60 bushels/acre vs 30 bushels/acre).  Both strategies can work for the farmer, but obviously the later is better for the food supply and better for the planet by reducing the need to farm more land.

You can see how the wheat farmers of NW Minnesota switched to this “intensity” approach in the biotech era.  The area planted to Spring Wheat actually has been declining since 1999 (see graph below). 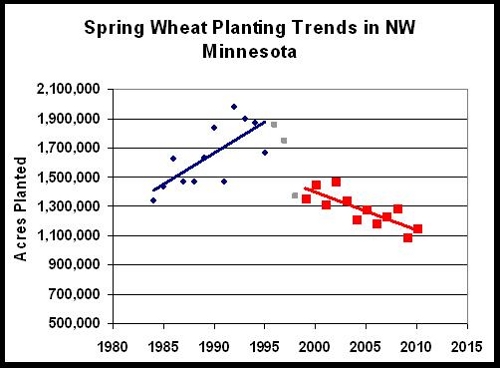 But, as more and more farmers switched to the more intense culture of wheat, the average district yield/acre increased: 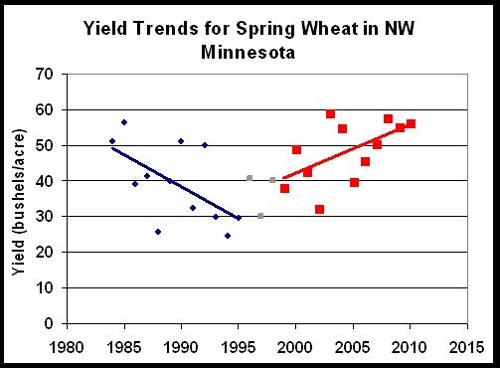 The net effect was that even with less wheat planted, the district delivered as much or more of the highly sought-after, high protein, hard-red-spring-wheat which is needed for artisan breads, pizza crusts and any other bread that needs high dough strength. 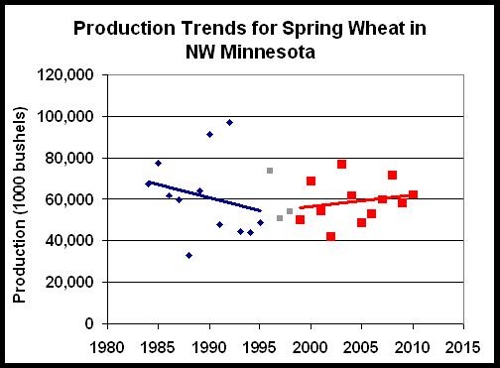 It is counter-intuitive, but the carbon, and energy footprints of the intensive approach to wheat farming are all better as long as one uses the appropriate denominator of yield (bushels per acre).  The graphs below demonstrate this for typical comparisons.  The 60 bushel/acre farmer had a slightly smaller “footprint” per bushel than the low intensity, 30 bushel/acre farmer.  The fertilizer rates here are based on University of Minnesota recommendations and I am assuming a 0.8% conversion of applied nitrogen to nitrous oxide. 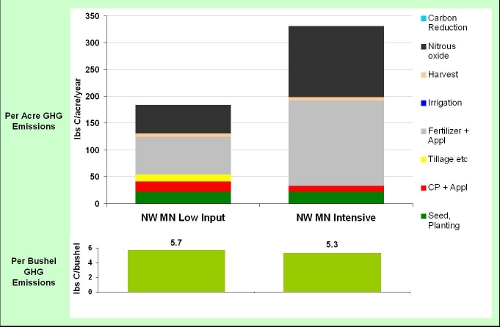 Northwest Minnesota wheat farmers are not by any means the only example of this sort of rational intensification to achieve sustainability, but they are a classic example.  I think that Jason Clay and the WWF would applaud these growers, and so would I.