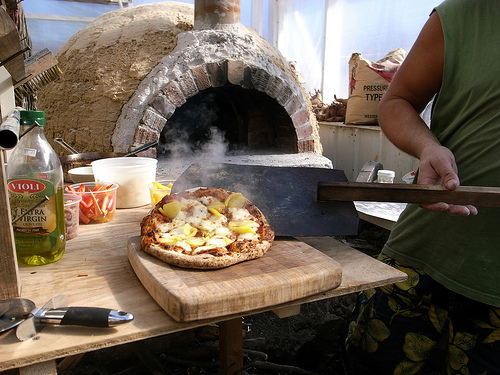 In an earlier (and surprisingly popular) post that I wrote here at sustainablog, I described how you can build your own inexpensive, wood-fired, outdoor oven. There’s no doubt: people are excited about building their own DIY, inexpensive ovens for baking pizza, bread, and other delicious foods. For all of those folks, I want to highlight this particularly unique design for a wood-fired pizza oven, built in a greenhouse.

My friend Chad of Red Earth Farms, nothing short of a pyromaniac, recently built a wood-fired cob oven in the greenhouse attached to his home. “Cob” is a simple mix of clay and sand, which is highly sculptable, and, when dry, extremely durable. What makes this wood-fired oven really unique, I think, is the simple fact that it’s built in a greenhouse. The oven, based on the classic cob oven design documented in Kiko Denzer’s Build Your Own Earth Oven (with modifications, no doubt), has a chimney that runs outside to keep the greenhouse space free from smoke. In effect, the pizza oven’s radiant heat is used to heat the greenhouse, and thus, the house to which it is all attached.

It must be stated that this cob oven is massive. It must be over 4.5′ in diameter. That’s partly because the interior dome dimensions are so large, but also because it has a ton of insulation around it. Chad used some kind of custom perlite mix, several inches thick (not sure exactly how many), to fully insulate the dome, which means that this oven has a very long bake time.

Baking Pizzas in the Oven

Chad also claims you could bake pizzas almost indefinitely once the dome is up to temperature (about 800 degrees), and he achieves long pizza bake times by maintaining a live fire on either side of the dome. This, of course, continues to heat the oven, and the hearth too (very importantly). Once the hearth on the opposite side cools down, Chad rakes the fire to the other side and continues baking on the newly charged hearth. Smart.

This is a fairly unique cob oven for those reasons — it’s huge insulation, and the fact that it’s been constructed in a greenhouse. During our cloudy Missouri winters, that means growing particularly heat-loving plants in the greenhouse is more feasible. Generating all of that heat inside of the greenhouse also keeps the home itself warmer. Very nifty. (And thrifty.)

Also, you  gotta love the fact that the baker needs to step down into a “pit” to bake. The “pizza pit” is a hole in the greenhouse floor that brings the baker down to the level of the oven so that food can be slid in and out with greater ease.

Chad’s oven gets me thinking about how I would build a cob oven differently when I do it again….

p.s. Don’t forget to read how you, too, can build your own inexpensive outdoor, wood-fired pizza oven!