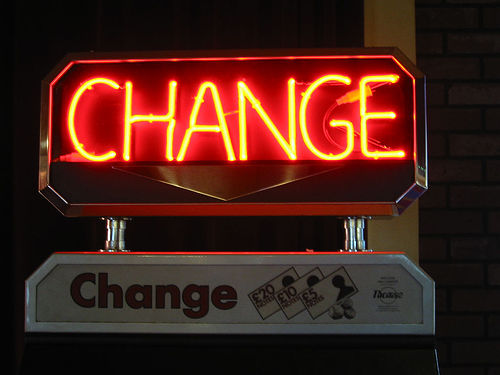 Pop Quiz: The following are statements made by each of the current presidential candidates–Hillary Clinton, John McCain, and Barack Obama. Try to match the comment with the candidate. For answers, see the end of this posting.

1) “My friends, I am most proud of the change that I brought about in Iraq that saved Americans’ lives.”1

3) “…the ways of Washington must change. The genius of our founders is that they designed a system of government that can be changed. And we should take heart, because we’ve changed this country before. … This campaign has to be about reclaiming the meaning of citizenship, restoring our sense of common purpose, and realizing that few obstacles can withstand the power of millions of voices calling for change.”3

No matter how difficult this little quiz was for you, I hope my general point is fairly clear. It seems that nowadays, if someone has any aspiration for any political position, from commander-in-chief to bridge-club president, then that person must be seen as the “candidate for change.” (If somehow President Bush were allowed to run for a third term, would he too try to sell himself as the “candidate for change”?)

And it is not just politics. Even environmentalism and other areas of social activism are simply electrified with the energy of “change.”

Again and again, we see or hear Mahatma Gandhi’s monumental statement, “You must be the change you want to see in the world.” If he were alive today and we gave him a nickel for every time someone used this phrase, the poor man would have a terrible time maintaining his vow of poverty!

So we are told we must be the change by making changes in our lives; we are asked to take part in activities that are making change; we support organizations that are working for change; we get inspired and fired up by promises of real change soon to come; we hear about all the changes that have been and will be made by this, that, or another….

At this point, you will have to forgive me if I say that I am simply sick of change.

Hearing about “change,” that is.

On the one hand, I think it is just great (and long overdue) that people in every demographic are being bombarded by calls to change change change. After all, people must realize that their bank accounts are out of balance before they will bother trying to make corrections. Since we owe a de facto debt to our planet and yet keep charging away like mad, we can no longer sit on the couch and hope everything will balance itself. Yes, we need change.

But on the other hand, I am not only tired of but worried about this all-out “change” assault. Why? My quiz at the start may show why: “Change” has become a sort of rhetorical blank check for every would-be policy maker. As a result, it becomes quite difficult to distinguish one from the other, the hype from the truth, the chump change and fool’s gold from the legal tender….

All of this buzz about “change,” then, concerns me as much as it encourages me. I think that it very soon becomes a cacophony, at which point more people will be more likely to tune the noise out, to change the station, to put in earplugs, than to start or keep paying attention. Nor will be they be as likely to start or keep making real, active, effective changes in their lives if they feel overwhelmed by commands to change. Honestly, so many of our personal problems start in a sense of being wrong somehow–too fat, too skinny, too weak, too ugly, too poor, too stupid…. Too much focus on making people change may only exacerbate this feeling of personal wrongness or worthlessness; too much focus on change may come at the cost of losing sight of what is right with us, what is good in us.

Remember the old maxim, “The more things change, the more they stay the same”?

Even if people do not tune out messages of “change,” I think it is also difficult to pick out from all the buzz exactly which methods and measures can be used to make, to be genuine change. I fear there is almost too much “change” out there for us to pick up, sort of like being in a secret treasure vault filled with gold coins: with so many shiny things to choose from, you may stand there frozen, eyes and mouth agape, not quite sure where to start…and left in the end with empty pockets. That is, people may not know what to do since they hear about so many things for them to do but never get any sort of reasonable, realistic, and feasible plan for implementing change.

But real change is priceless.

Nothing changes when you
* write a big check to a non-profit organization and then drive your car to the mailbox at the end of the block to mail it,
* get all of your family’s meals from a fast-food restaurant,
* avoid using compact fluorescent bulbs because the lighting “looks bad,”
* experience nature from the comfort of your couch via Animal Planet on the HDTV,
* believe that there is too much to change for anything to change for the better….

Real change happens when you
* carpool with a neighbor to the grocery store,
* get out and vote for the candidates (national, state, and local) who seem have sensible plans for preserving the welfare of all life,
* replace your old-school light bulbs,
* plant a garden,
* become a vegetarian or (even better) a vegan,
* pick up litter with a group of friends,
* celebrate the many good things you and those around you are doing….

Yes, you store up many pennies in heaven by actually making change in your own life where necessary and showing others how to make change in their lives, by actually clarifying what investments in change have the best returns, by actually putting your money where your mouth is.For better and for worse, we now live in a climate of change where candidates spend millions on 30-second ads selling themselves as candidates for “change,” where the drone and buzz of “change” may cost people their hearing, and where talk of “change” is startlingly cheap. In this climate of change, we already have pockets full of chump change and fool’s gold.

But, despite all of that costly buzz, it is so easy to make change–so easy, in fact, that every single little shiny piece of gen-u-ine, solid, hold-it-in-your-hand change becomes priceless.

I hope you will not sell your energy and desire for change for the price of cheap talk, chump change, or fool’s gold.

I hope you will not shut your eyes and close your ears.

I hope you will go beyond the rhetoric and determine for yourself which change is genuine.

I hope you will listen to your heart to determine what things mean the most to you and then educate yourself about the best ways to protect and preserve them.

I hope you will be a force for change and a role model to others.

I hope you will make “change” more than just the latest buzzword, fad, gimmick, hype, humbug, and trend.

So…can you spare some change?

Is so much talk of “change” good or bad, no matter what area of public life it comes from? Where are some of the oddest places you have heard about somebody or something making “change”? How can we distinguish real, effective change from cheap talk?