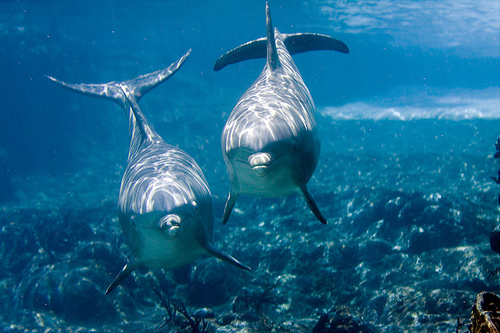 The deaths of over 120 bottlenose dolphins across a five month period has been classified as an “unusual mortality event” by the National Oceanic and Atmospheric Administration (NOAA). In the coming weeks, the agency will be launching a full investigation into what caused the mortality spike.

From November 2011 to this past March, 123 bottlenose dolphins were found stranded along the Texas coastline. Researchers were alarmed not only by the high number of dolphin deaths but also by the ages of the dolphins. While it’s not unusual to find elderly or very young dolphins washed up on beaches, many of the 123 dead dolphins were juveniles.

Over the past two decades there have been only 56 officially recognized “unusual morality events.” The UME classification was established under the Marine Mammal Protection Act in 1991 and is defined as “a stranding that is unexpected; involves a significant die-off of any marine mammal population; and demands immediate response.” It allows the NOAA to access more funds and set up a research team.

Bottlenose dolphins are no stranger to UMEs. Just last year a UME was declared for bottlenose dolphins in South Carolina. Bottlenose dolphins can be found throughout the world in bays, estuaries and river mouths. They have lifespans of 40-50 years, can weigh from 300-1400 lbs, and grow up to 12.5 feet. Dolphin groups can contain anywhere from 2-15 individuals at a time but membership fluctuates rapidly. Like humans, dolphins constantly find new groups to live with and sometimes don’t mind being on their own.

Currently, there is no clear consensus as to what is behind the dolphin strandings. Some likely culprits include the infamous “red tide” and the recent Deepwater Horizon spill.

As you may know, “the crimson tide” refers to more than just a cocky football team. Crimson (or red) tides are caused by massive algae blooms in the Gulf. This year the red tides have been worse than usual. Recent drought-like conditions have made the estuaries feeding the Gulf extremely salty and ripe for giant blooms. The algae produce a toxin which can affect a dolphin’s nervous system and sometimes cause death.

Some of the stranded dolphins, however, were found with discolored teeth and lung infections. Researchers believe this may be linked to the millions of gallons of oil that leaked into the Gulf in April 2010 but no final consensus has been reached. Additionally, four of the dolphins were found with a grayish, muddy substance in their stomachs. While it isn’t being identified as oil, tests are being run to determine if it’s composed of hydrocarbons.

Whether or not the dolphin deaths were manmade or an act of nature, they serve as yet another reminder of how vulnerable life on this planet can be. They remind us that ecosystems are fragile and that even the smallest change can have massive impacts.

Plushnick-Masti, Ramit, “Dozens of dolphins stranded in Texas since fall” The Houston Chronicle

Brian writes for the dental professionals at Greenspoint Dental in Houston, Texas.