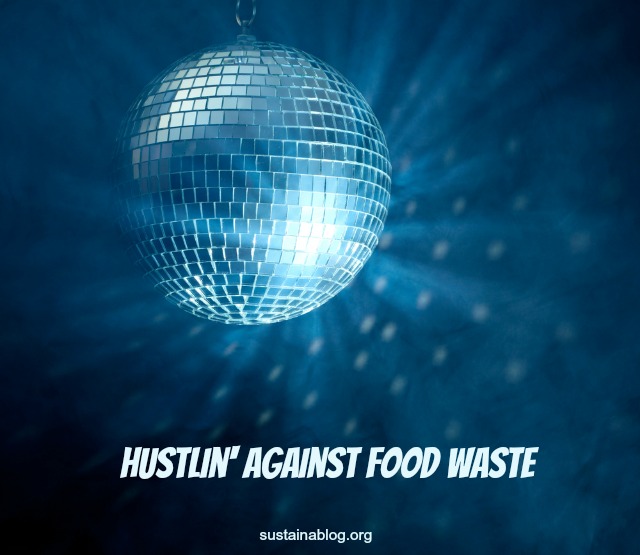 I freely admit that I’ve never associated the polyester leisure suits, gold chains, and platform shoes with efforts to reduce food waste… but, then, I probably just wasn’t thinking hard enough. UK-based food waste organization Feedback has made such a connection, and is successfully keeping edible food out of dumpsters and landfills by hanging up a disco ball, hiring a DJ, and making a big pot of soup.

Disco Soup is the name of the event, and there’s one going on tonight at the Mazenod Social Club in London. Think of a Food-Not-Bombs meal with a beat: Feedback staffers and volunteers canvas grocery stores to collect food headed for the dumpster. They book a club and a DJ, and invite others to join them dancing, drinking, and making a meal. According to London social scene blog Now. Here. This., “Guests ‘chop to the beat’ in a mass cook-up while they drink BYO booze. Some turn up in food-themed fancy dress. Then, after eating, shit gets wild.”

Sounds like a good time, huh? But that’s not surprising: Feedback has developed quite a knack for raising attention about food waste with unique, fun events. Since 2009, the organization has hosted its flagship “Feeding the 5000” meals in Europe; the concept just recently made its way to the United States. The idea here is to make enough food to feed five thousand people with food slated for the landfill. Part political rally, part outdoor party, these events are designed to raise awareness among policy makers, non-profits, and ordinary citizens.

Disco Soup started in January: tonight’s event is the fourth one, and there will be another later in the month.  And it’s catching on: 150 people attended the last event. But what’s not to like: cooking, drinking, and dancing, all for a good cause!

Have you attended one of these parties? Or a similar event somewhere else? Tell us about your experience, and how well you think it raises awareness about our wasteful ways with food.