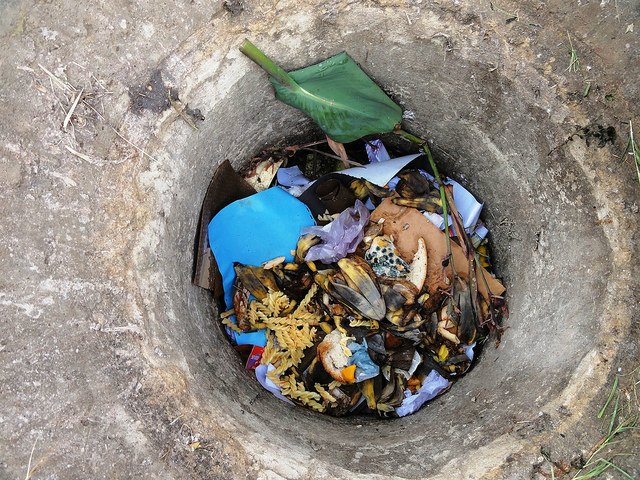 I’ve been fascinated by the notion of the do-it-yourself biogas plant ever since I read about a Chinese farmer that built one in Jeff Goodell’s Big Coal. But I haven’t written about them because, well, biogas is flammable, and I didn’t want to get a call from somebody’s lawyer. I like to think sustainablog readers are smart folks, though, so let’s give it a shot (with the warning, of course, that biogas is flammable – don’t blow yourself up, or asphyxiate yourself! Treat this like conventional natural gas or propane.). If you’re already composting, though, building your own biogas generator (or methane digester) is really just a step up from what you’re already doing.

If you’re composting right, your pile or bin is just releasing carbon dioxide – a well-tended composting set-up encourages the growth of aerobic microbes. But if you’re not aerating properly (and we’re all guilty of this to some degree), anaerobic microbes are feeding in your pile, and they release methane (which smells badly… you know what I’m talking about). Some materials, like manures, also do this… thus the contribution of things like feedlots to climate change. A biogas plant allows you to take full advantage of the whole decomposition process, and create fertilizers for your plants as well as cooking fuel.

An article from last Fall at Mother Earth News provides more details about the concepts you’ll need to consider in building a digester. Keep this article on hand for any of the plans you decided to build, and follow its guidelines for safety concerns surrounding the biogas itself, as well as effluent.

How to Build a Biogas Plant: 3 Plans

After poking around at various plans, I realize that most of them are largely the same: differences come down to the size of the digester you build, and the materials you use for tanks and pipes. As you might expect, Instructables is a great source for these kinds of plans; here are several that I’ve found:

1. The Demonstration Plant: Want to just try out making your own biogas on a very small scale? This plan from user kartikaa23 strikes me as something you’d see in a science fair project, but could be used to make small amount of biogas for cooking. The main tank is made from a large plastic water bottle (the kind that goes on a dispenser).

2. The 5-Gallon Bucket Size Digester: This plan from user antoniraj strikes me as designed more for practical use vs. demonstration, but still features easily available materials. Lots of good pictures of all steps of the building process.

3. The Big Boy Digester: 14-year-old Sahas’ plan appears to use something like a 55-gallon plastic drum. The written instructions are a little more sparse on this one, but it also has good photos.

Again, the basic concepts cut across all plans – if you build one, you could easily do one of the others. Have you built your own biogas plant? What issues/challenges did you run into? Share your thoughts and experiences with us.