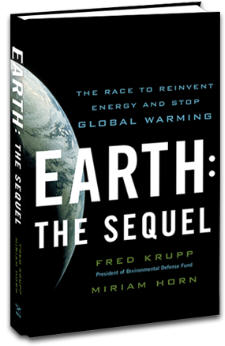 I’m a bit behind the curve in getting to Fred Krupp (the president of Environmental Defense Fund) and Miriam Horn’s new book Earth: The Sequel— my reading time ain’t what it used to be! While other green bloggers have beat me to the punch on this one, I still wanted to weigh in on this book, especially since the US Senate begins its debate of the Lieberman-Warner-Boxer Climate Stewardship Act today. While this timing was a matter of luck, as opposed to planning, Krupp and Horn’s book provides some valuable insight into the debate that will occur on the Senate floor this week… let’s hope a few of our esteemed representatives have read it.

At it’s core, Earth: The Sequel is an argument for cap-and-trade as a viable, market-based mechanism for addressing climate change. While long-time sustainablog readers are likely up on the concept of cap-and-trade, it’s worth a quick explanation. Krupp and Horn define the concept in the book’s first chapter:

The U.S. Congress must set a legal and steadily declining limit on global warming pollution. The allowances will be divvied up among emitters, or auctioned by the government to raise revenues — or some combination of the two. Polluters who emit more will need to pay for the extra pollution reduction achieved by others; those who can reduce global warming pollution further will profit by selling those reductions in an open market. We can, in short, use the power of the market system to climb out of the hole created by flawed markets.

One might worry that what follows such an introductory chapter might be a long, boring treatise on market-based economics and the environment; rather, the bulk of the book focuses on the companies (mostly start-ups) involved in innovative research and development of next-generation clean energy technologies. I’ll be discussing some of those stories in subsequent posts at CleanTechnica and Ecopreneurist. Today, I want to stay focused on this main argument: cap-and-trade is the mostly viable method of achieving significant reductions in greenhouse gas emissions.

Krupp and Horn acknowledge the debate over this issue: many economists (including Nobel Prize winner Joseph Stiglitz) think a carbon tax provides more promise than cap-and-trade. Stiglitz argued that if the prices of carbon sinks low enough, it pays to pollute; a tax can keep the price in line with the costs imposed by greenhouse gas emissions. It could also provide government revenue for investments in infrastructure, research and preparedness. Krupp and Horn argue that a cap-and-trade system could provide government revenue through the auction of permits, and that such a system will work much better to harness the market: “A tax creates no such market, and so fails to enlist the full range of human potential in a struggle where every bit of creativity is needed.” Furthermore, a tax involves elected representatives in a guessing game: what’s the right price to spur the private sector into action? If they guess too low (and you can bet lobbyists from across the spectrum will push for that), little to nothing is gained.

I tend to agree that letting government set prices is a dicey proposition; rather, our representatives should focus on their main role of protecting the commons by establishing a cap based on the best science available, and then letting the market sort out the prices. Greenhouse gas emissions must have costs associated with them in order for the market to factor them in (or to factor in the value provided by nature’s services), but government generally does a lousy job with establishing prices themselves (just as it does with picking technologies, another argument in this book).

I’m interested in your thoughts, though: what’s the best way to harness the market to address climate change? I’ve created a forum for this discussion, so please share your thoughts.

I’ll continue my discussion of Earth: The Sequel tomorrow at Ecopreneurist. And, if you want to see a really good explanation of cap-and-trade, check out Dr. Holmes Hummel’s PowerPoint presentations on the subject.