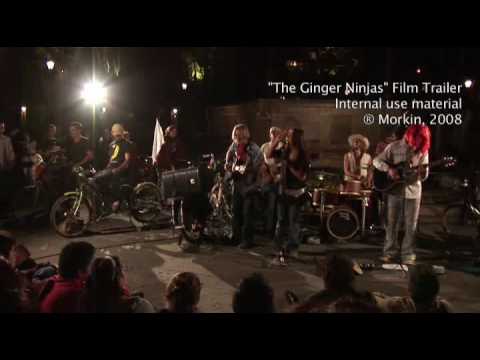 No doubt, you’ve heard about efforts by bands/solo acts like Pearl Jam, Sheryl Crow, Guster, and Maroon 5 to “green up” their tours and recordings. Biodiesel-powered tour buses, LED stage lights, and various forms of carbon offsets often play into these initiatives… but all of them could learn a thing or two about reducing their impact from The Ginger Ninjas. While the Ninjas don’t have the marquee status of the other bands mentioned, they’ve got a much lighter footprint: since 2007, they’ve been on tour by bike (which puts them in the league of cellist Ben Sollee).

Their Pleasant Revolution tour has grown over the years, but still features pedal-powered transportation (sometimes supplemented with rail transport) and power for their (admittedly minimal) stage set.  If you haven’t caught them on stage, that’s OK: they’re hoping to come to the screen soon. Argentinian filmmaker Sergio Morkin crossed paths with the band in Todos Santos, Mexico early in the first leg of the ongoing tour, and has stuck by them shooting footage (over 200 hours at this point). He’s now at work pulling that raw footage together into a documentary on the tour: “a film that speaks of the will, of freedom, of things not happening as one might imagine. It speaks of the price paid for following your heart, and of the rewards for fighting and risking for what you believe in.”

Of course, this kind of production effort takes money. The band has kicked some money Morkin’s way from CD sales, and some friends of the project have also contributed. But they need $20,000 for post-production work, and have put together a Kickstarter project to raise the money.

The good news? They’re over 75% there. The other news (not really bad): they’ve only got six days left to raise the remaining $4000+ needed to fund the project (and Kickstarter projects are time-sensitive – don’t reach the goal by the deadline, and you get nothing).

I’ve now had two “friend of a friend” contacts with the Pleasant Revolution: back in July, I gave Heather Normandale a plug on the recommendation of fellow Important Media contributor Zachary Shahan. This time, good friend Simran Sethi connected me with the Ginger Ninja’s Kipchoge Spencer. The universe seems to be speaking, so I’ll kick in on this one… and hope you’ll consider doing the same.

Seen any of the Pleasant Revolution shows? Share your experience with us… looks like a great time! If you haven’t, check out the trailer below, and enjoy.

Image credit: dustinj at Flickr under a Creative Commons license