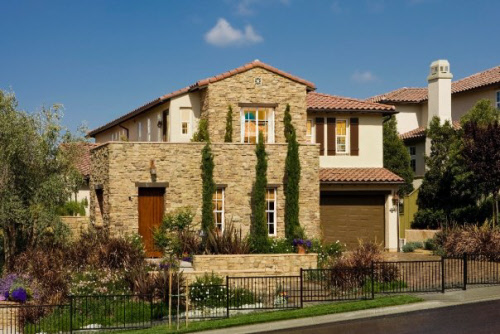 Recently, I overheard a two people arguing about the relative efficiency of an old, small, inefficient, cold climate home in the Northeast versus a newly constructed large Southern California home using energy efficient methods. At first I guessed that because of the house size, the NE home would be hard to beat out, but then I realized that I was unsure. So I decided to do some back of the envelope math.

To frame the context with some kind of starting point variables, I used a home from La Costa Life, an upscale development in California, vs a dilapidated home in the Northeast.  Basically, I’m going to use the best efficiency in the new home and the worst possible in the small NE home in any instance that is unknown (which is basically all of them).  I’ll be making plenty of assumptions along the way, so hold on to your seats, and know that the conclusions would likely shift with different assumptions.  Based on my reading, I’ll assume that a small Northeastern home uses 50-60% of it energy on heating, but has roughly half the square footage.

The best data I found was from the US Energy Information Administration.  Every four years they conduct the Residential Energy Consumption Survey (RECS) and compile the results into reports.  There are a lot of categories broken down, but not really enough to accurately compare the Large SoCo home and the Small Northeast home.  The main issue is that it doesn’t break the energy usage into categories, just how many homes use certain types of heating (natural gas, electric, etc).  Then energy usage is lumped into averages based on things like year of construction, income level, and square footage.

Although they didn’t directly answer the questions I had, they did get closer than anything else I found, and gave a few interesting takeaway generalizations:

The Breakdown on Household Energy Use

When I crunched the numbers I found that, even after accounting for the fact that people with more income use more energy, their was a sizable difference in energy consumption between the two homes… and not the kind of difference you might assume:

Usage Per Household in Mil. of BTU

Those reduced heating costs do quite a bit!  The smaller house comparison from the Northeeast to Southern California used nearly 30% less energy.  Even the large SoCo house was still about 15% more efficient than the small NE home to maintain.  Note that I say to maintain, because if we’re including initial energy inputs for the houses, then the small house is going to have a bit of a buffer zone in energy usage.

However, all things being equal, it looks like the West Coast is the place to be to use less energy.  To support that point, in 2005, the West Coast had the lowest emissions per capita because of its higher usage of clean energy sources.  Looks like they have a win-win there.

So, if you’re going to live in a large home, move to California.  It’s the best place in the US to do it as ecologically as possible. Just keep in mind that a large house is still not necessarily the greenest choice: the LEED for Homes rating system, for instance, makes any three bedroom house over 1900 square feet increasingly more difficult to qualify for its certification.

Of course there are dozens of assumptions here. Passive solar homes, geothermal heating, and even insulated curtains would complicate the calculations. But it does give me food for thought, and my original assumptions were wrong in this case. It definitly underscores the importance of insulating well, as that rustic cabin in the snow with single pane windows might be using more energy than an Orange County luxury home!

Warren Howe is a freelance writer living in San Diego. He lives in a small house that he shares with roommates, so he gets the best of both worlds ecowise.