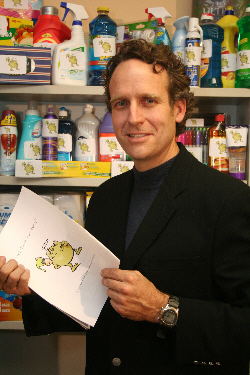 I’ve come across so many claims of “greenwash” in the last year or so that I’ve become a bit inured to them: for some environmental activists, making this charge against any form of corporate sustainability efforts seems reflexive. Of course, my mild cynicism towards such claims isn’t much better: there certainly are marketers that, knowingly or unknowingly, make “green” claims about products, services or practices that don’t deserve them. As the environmental impact of business has come increasingly under scrutiny, and as companies try to respond and/or clean up their acts, the labels seem to fly faster and more frequently — enough that both claims of eco-friendliness and greenwashing could become overused.

So, I was intrigued when I stumbled across the GreenBiz Radio cast entitled “Renouncing the Six Sins of Greenwashing.” After all, GB isn’t traditionally activist in its approach, and does a lot of work with major corporations — I know they wouldn’t use the term lightly. The cast features an interview conducted by Executive Editor Joel Makower with Scot Case of Terrachoice Environmental Marketing. Terrachoice released its report The “Six Sins of Greenwashing”: A Study of Environmental Claims in North American Consumer Markets this month, and Case spelled out the sins themselves, some broad examples of their use, and a some solutions for both consumers and marketers.

Case’s interview with Makower roughly parallels the 15- page report, which is a quick and interesting read. Terrachoice surveyed just over 1,000 products with green claims at “six category-leading big box stores”: all together, these products bore 1,753 environmental claims. After comparing these claims again the “sins,” exactly one product came out completely greenwash-free; the environmental marketing on all of the others showed signs of at least one kind of misleading or outright false statements.

So, what are the six sins? They are:

The report doesn’t identify specific products or retailers: it only points to product categories, and notes examples of problems. So, it doesn’t let a consumer know what companies or products engage in such sins (which would probably be a bad move for a marketing company); rather, it provides pretty specific information on how to identify problematic green claims.

What’s the answer to this still-widespread problem. For consumers, it’s awareness and knowledge. The report not only spells out the sins themselves, but also takes a look at some of the best certifying agencies for green products. For marketers, transparency and due diligence are key: in our “information age,” it’s simply bad business to make claims like these that can’t be supported. The real danger here, of course, is creating cynicism among consumers about green claims in general… if you need an example of where this could go, take a look at this op-ed from the University of Oregon’s Oregon Daily Emerald.

Some might argue that there’s a larger problem here, and that’s trying to green consumption: try as we might, we won’t shop ourselves to sustainability. True, but the market is also the place that the “green curious” can begin to think about the environmental impact of their product choices (and, hopefully, the broader impact of our consumer culture). Conspicuous consumption won’t change overnight, but encouraging shoppers to consider the impact of the choices they make can happen quickly. If they’re not encouraged with valid green marketing claims, though, the current wave of green consciousness is likely to be just another fad.

I don’t know if the majority of “sins” identified by Terrachoice involve deliberate greenwash by companies and marketers, or if they just represent a lack of understanding. Ultimately, it doesn’t matter: consumers that constantly encounter greenwash will begin to dismiss all such claims. If that happens, the concept of a green economy is probably dead in the water.