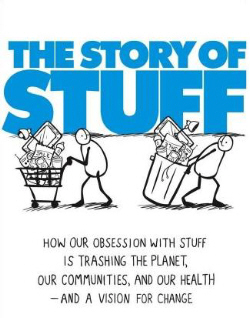 If you a blogger, web media producer, or some other kind of internet content creator, it’s hard not to admire Annie Leonard. She, along with the folks at Free Range Studios, took the rather weighty topic of lifecycle analysis, and turned it into a 20-minute video that frames the subject in a manner for almost anyone. “The Story of Stuff” turned into a huge online hit, became a often-used resource for teachers, and even garnered its share of criticism.

On Tuesday, Leonard’s book on the topic, also titled The Story of Stuff, was released by Free Press (and, yes, that’s an affiliate link). As in the video (and follow-up videos like “The Story of Cap and Trade,”), the book takes a wide range of interrelated topics, and presents them in both comprehensible and comprehensive manners. Leonard does an admirable job of bringing her voice to the page, and demonstrating the passion she’s developed not only for analyzing the environmental impact of all of the “stuff” we produce and buy, but also for the psychological and sociological ramifications of cultural “affluenza.”

The Story of Stuff: Lifecycle Analysis

At one level, The Story of Stuff is a book about lifecycle analysis of the products we buy. The book is organized around elements of product lifecycles: extraction, production, distribution, consumption, and disposal. In each chapter, Leonard delves into the processes and materials involved, provides a ton of information on the environmental and social costs created, and offers examples of hope and forward thinking.

You might expect a level of dryness with this information. While Leonard presents many facts and statistics to back up her claims, she also interweaves this information with stories of her own experiences working with communities around the world suffering from financial and ecological impoverishment and exploitation. She does well foregrounding the human element even as she delves into rather dense scientific concepts. While you’ll leave this book much better informed about the costs created by mass consumption, you’ll also remember the individuals and communities that bear many of those costs.

The Story of Stuff: The Degradation of Human Community

If Leonard only examined the health and environmental impacts of our addiction to consumption, she’d have still created an important work. She goes beyond these elements, however, to show not only how Western-style materialism degrades the environment, but also hurts human relationships. You’ll find numerous stories about the suffering imposed on people in the developing world as resource extraction and product production destroy indigenous communities, lead to wars over resource access, and leave behind cultural and ecological messes.

But the problems aren’t relegated to the developing world: Leonard also notes throughout how, despite our immense wealth, people in the developing world, and particularly the United States, really aren’t enjoying higher levels of happiness and life satisfaction. Just the opposite, in fact: tying our sense of success and purpose to material acquisition has left us overworked, distant from our families, neighbors, and communities, depressed, and anxious.

The Story of Stuff: Imagine

I couldn’t help but think of John Lennon’s iconic song as I read Leonard’s Epilogue, entitled “Writing a New Story.” Throughout the book, she notes that dealing with the problems created by massive consumption won’t come by “nibbling at the edges” of the current system; rather, we have to imagine a new paradigm for how we live our lives. In the Epilogue, she list four changes that must be made in order to create that paradigm:

Leonard’s vision is radical in the sense that it requires big changes not only in how we meet material needs, but, perhaps more challenging, in how we conceive of those needs. I have no doubt some critics will write her vision off as “pie-in-the-sky,” or even “hippy dippy”… I even had some of those thoughts myself as I read the last section. On the flip side, though, do we really want to spend more time at work than with our families, or to send our young people off to fight and perhaps die, or to pay “cheap” prices on goods that will create greater costs not just for people in other countries that we don’t know, but for our own descendants? Do we really want to just accept these things by noting “that’s the way it’s always been”… and then getting back to work or the TV?

I once heard a speaker note forcefully “Nothing is achieved without vision.” Leonard’s created a challenging vision in this book… but also one that is very compelling. The Story of Stuff is definitely worth a read… and, more importantly, a lot of thought afterward.

Please note: Free Range Studios provided me with a free review copy of The Story of Stuff