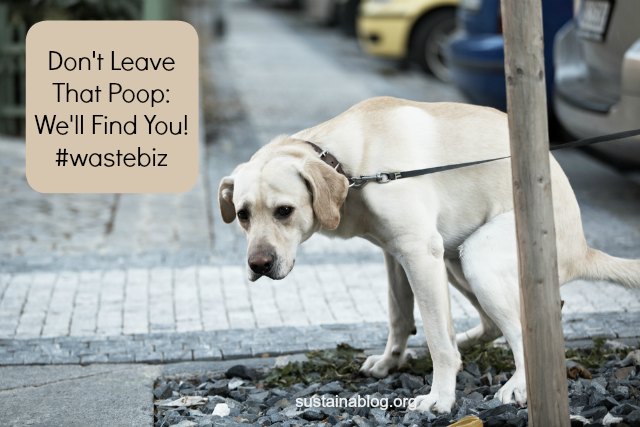 Yep, we’re running a day late this week, but not because there’s a dearth of news coming out of the waste space. In fact, our first story deals with a waste issue that tends to make people crazy: dog poop that doesn’t get picked up. I know it’s frequently a discussion on our neighborhood Nextdoor community: some dog owners aren’t very good about cleaning up after their canine friends. Not only does such negligence create a mess, but also produces a health hazard, as microbes in that poop can work their way into soil and groundwater. But unless you’re willing to follow those dog walkers around, or do bag checks (and risk becoming that neighbor), what can you do?

Knoxvilled, Tennessee-based BioPet Vet Lab has created a service for communities wallowing in unpicked-up poop: PooPrints. Take a look at their video introduction to see how this could work for a neighborhood, apartment complex, or other community:

No doubt some will find this a bit “big brother-ish,” but I’m guessing the use of such a system will work even before dog owners “offend”: no one wants to be identified as the guy who left that dog poop behind. Would you be OK with having your dog’s DNA listed in such a system? Do you think this would work when combined with effective disincentives? Or could we accomplish the same thing just by making bags available? Share your thoughts…

Also on the Waste Biz radar this week…

Getting the waste out of the waste business: Trash haulers and recyclers need to make sure that operations and employees are working efficiently: margins are tight enough! Plano, Texas-based cloud services developer FieldAware has created one of its Business Intelligence Dashboards for the waste industry. The mobile app connects workers in the field to real-time data that can help optimize their work. The company rolled the software out at Waste Expo 2015 earlier this month. (via Waste Dive)

British supermarkets commit to redistributing “food waste”: It took a law in France, but the UK’s largest supermarket chains, as well as their trade association, have “…unanimously agreed that more collaboration is needed to redistribute more surplus food to charities.”