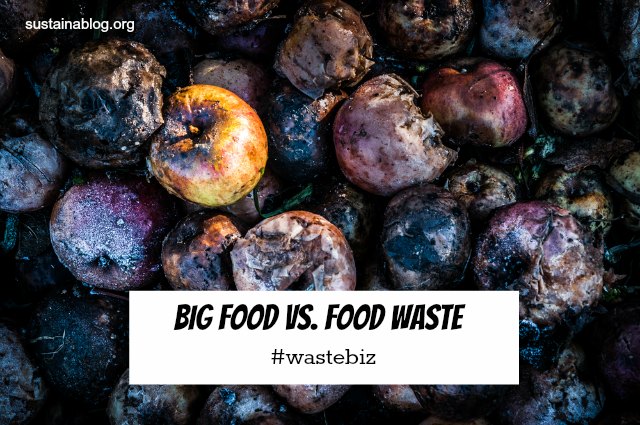 The industries that make up “Big Food” – ranging from agricultural biotechnology to food processing to fast food to institutional catering – generally don’t get a lot of love from the sustainability crowd: applying industrial standards to the stuff we eat just doesn’t sit right with many (for numerous good reasons). But as I read through a press release from PepsiCo this week, it struck me that these kinds of companies may be very well-positioned to take on the issue of food waste. And, so, I’m guardedly optimistic at the founding of the International Food Waste Coalition.

Made up of companies such as the soft drink maker, Sodexo, Unilever, SCA, and others, as well as the non-profit WWF, the IFWC plans to take a “total value chain” approach to the massive amounts of food we waste – about 30% worldwide. While many of our efforts focus on the retail and consumer points in the chain (which are significant), a lot of food gets lost further up, whether in farm fields, or in distribution centers, or on trucks, ships, and trains moving it around the world. As these companies are involved in operations at all points in the value chain, it makes sense that they may well have some insight on bringing waste numbers down.

Their overall strategy: focus on the value that exist in the stuff that gets thrown away. That’s fairly vague, and no doubt involves calculations of profitability… but it is a meaningful starting point for conversation, and perhaps even some measurements. We’ll definitely want to keep an eye on an effort like this – lots of potential for spin and feel-food PR – but also lots of possibilities for dramatically lowering the amount of food we grow, and then dispose of. The organization will focus first on the issue of food waste in Europe.

What do you think? Just don’t trust Big Food? Or think maybe this is a problem they’re well-suited to address? Or something else? Let us know in the comments…

Also out of the waste space this week:

Meal delivery service takes aim at food waste: On a much smaller scale, new Greek meal delivery service Marathos sees fighting food waste as part of its mission. Since a customer only receives the ingredients needed for making the meal s/he ordered, they won’t have a fridge full of produce slowly rotting. (via ekathimerini.com)

Recycle your deodorant: Schmidt’s Deodorant (which I hear is good stuff) has started its own recycling program. Send in 5 empty glass containers to the company, and they’ll hook you up with a free jar. This doesn’t work with their deodorant sticks, though… thanks, Becky Striepe, for the heads up!