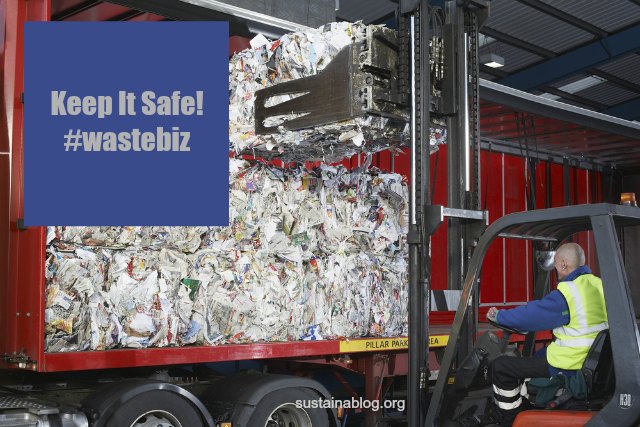 As we’ve noted numerous times in the past, the recycling industry holds great promise not just for freeing up landfill space and reducing greenhouse gas emissions, but also for putting more people to work. A new report from GAIA, Partnership for Working Families, MassCOSH, and the National Council for Occupational Safety and Health argues that before the industry starts bringing in new workers, it needs to spend some time on its health and safety practices. According to the report, human sorting of recyclables in materials recovery facilities (MRFs) – a necessary function – can be particularly dangerous: “The combination of repetitive motion in awkward positions, exposure to extreme heat and cold, working around heavy machinery and moving vehicles, and the unpredictable nature of the materials that come into recycling facilities means that recycling workers face high workplace injury rates.”

No doubt, there’s a certain amount of danger inherent in this work. But enough to nearly double the injury rate? The report argues that with proper oversight and prevention procedures, MRFs can avoid the injuries and deaths seen in recent years. One particular area that needs attention: the hiring of temporary workers, who often don’t have the necessary level of training to do their jobs safely.

The report’s authors put the onus for changing the industry on municipalities who contract with private companies to handle recycling. As regular commenter Lawernce Kenemore has pointed out, recyclers rely on these contracts for their revenue, so adding health and safety conditions to them could make a real difference… provided, of course, that these conditions were verified. I’m excited about the notion of recycling creating more jobs; let’s make sure they’re jobs that enhance workers’ quality of life.

Know more about working conditions inside MRFs? Tell us what you know…

Also on the waste front:

Consumer brands trying to get in front of food waste: Apparently repeating the amount of food we waste from farm to table is working – not only are some governments passing laws on this issues, but major food companies are starting to make commitments to reducing their waste. Reuters notes that the “Paris-based Consumer Goods Forum (CGF), a network of some 400 retailers, manufacturers and other players from 70 countries with combined sales of 2.5 trillion euros ($2.8 trillion)” has pledged to halve its food waste by 2025 (from a yet-to-be-determined 2016 baseline).

Google reusing coal plant for data center: Not only will the tech giant be using renewable energy as much as possible to power a new data center in Alabama, but the center itself will be housed in a retired coal-fired power plant. (via Cleantechnica)