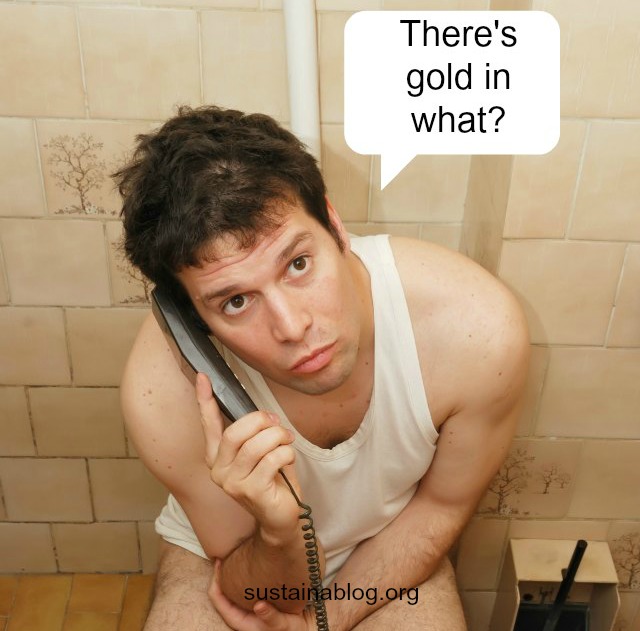 Tired of a piece of gold or platinum jewelry? Do you just throw it away? Of course not: that metal’s still valuable, so you’d sell it, trade it, or otherwise try to “extract” that value. As we’ve seen before, when we throw electronic devices in the trash, we’re basically doing the same thing: cell phones, tablets, and other electronics also have precious metals in them that still hold value. It turns out that we’re also discarding these metals, and others, when we flush the toilet: a scientist from the U.S. Geological Survey will argue in a paper at the annual meeting of the American Chemical Society that we should see our sewage treatment plants as mines for metals.

So, yes, there’s gold in that poop… but don’t do anything weird or gross just yet. Kathleen Smith and her team at USGS are still exploring the best methods for getting that gold and silver out of sewage. We’re talking microscopic amounts, but enough that for every 1 million of use, we’re pooping away $13 million in precious metals. Smith notes “There are metals everywhere…in your hair care products, detergents, even nanoparticles that are put in socks to prevent bad odors.”

More and more, the sludge produced by our sewage systems gets processed, and then gets used as soil amendment… and metals aren’t helpful there. So, figuring out how to extract gold, platinum, copper, and lesser-know materials like vanadium, not only preserves the value they represent, but also makes the biosolids produced by sewage processing more useful and valuable. Recovering this material means less has to be mined, also.

There are potential environmental challenges to this process: Smith notes that extracting metals from poop would likely involve leachates, the chemicals currently used to get metals out of rock. As you might imagine, they’re not particularly green compounds, but Smith believes that they could be used safely and responsibly in controlled environments.

No doubt, the fact that our wastes are a source of metals is a little disturbing,  and someone might want to look into the fact that our bodies are processing these materials. But we are… and there’s definitely no sense in wasting them. Got thoughts or ideas on extracting metals from poop? Let us know in the comments…

via Salon and Motherboard