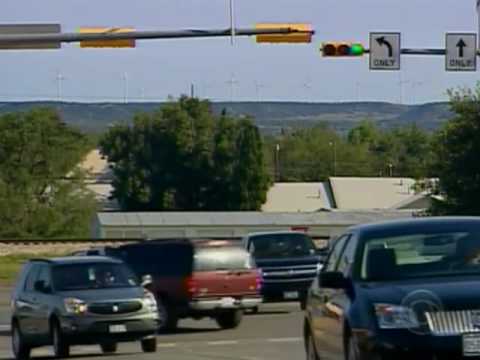 Texas is numero uno when it comes to wind power generation. The Lone Star state has installed wind power close to 5,000 megawatts which translates to enough electricity to power a million homes. The huge turbines, scattered across wide open spaces, conjure up more progressive feelings compared to those generated at the sight of oil rigs or smoke stacks; they are feelings of a changing world, a cleaner world.

Because of the increased demand for wind power installation, the economies of some small locales in Texas are growing and welcoming the change. But this changing tide in the energy industry isn’t without some bumps in the road. Recently, when an unanticipated cold front killed 80% of the wind power in Texas, electricity for some offices and factories had to be cut.

This is the most obvious problem with renewable energy sources like the wind and the sun. But what if there was a way to store energy when there is a surplus and kick it back out when there is a lag in production or increased demand. I recently learned about a company called Beacon Power that developed a gnarly flywheel energy storage system. The technology seems pretty simple and has probably been around for sometime but I haven’t seen much of it being utilized with renewable energy—where it would be most valuable.

Essentially, what makes the storage capabilities of a flywheel system sustainable is the ability to store energy in kinetic form as opposed to chemical. A wheel spins on a shaft holding energy that can be used when power is lost. An electronics module allocates energy to the motor to drive the flywheel and when power is lost, this motor becomes a generator and sends compatible energy to the grid. Beacon flywheels are specifically designed to withstand extreme rotation speeds that allow for the storage of large quantities of energy. They have a process called Smart Energy Matrix, that is a system on interconnected higher-power flywheels for specific use with utility grade operations.

As renewable energy is further and further embraced, we will likely see more on energy storage systems like the flywheel.

Below is a short CBS special about wind farming in Texas. Enjoy:

Image credit: roxannejomitchell at Flickr under a Creative Commons license