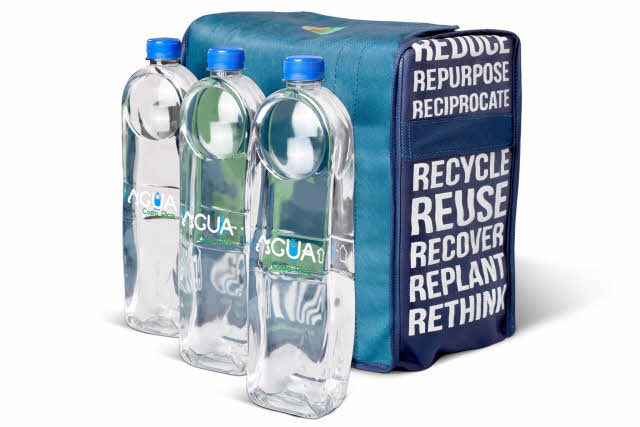 Posted by The Center for Regenerative Design & Collaboration on Friday, April 3, 2015

The notion of turning used plastic drink bottles into roofing tiles isn’t a new idea; designing bottles specifically for this repurposing is, though. That’s what builder Donald Thomson has done through his Costa Rica-based company, The Center for Regenerative Design and Collaboration. A 25-year resident of the Central American country, and a veteran builder of affordable housing, Thomson knew that durable, inexpensive building materials are a must for poor citizens. After a beach clean-up project five years ago, he also realized there’s a lot of plastic bottle waste out there. Thomson saw that the bottle waste could serve as a feed stock for roofing tiles… if they were designed right.

Thomson’s been working on this concept ever since. and AGUA bottled water is now available for sale in Costa Rica. Rather than the typical cylindrical shape, AGUA bottles are flat with a bit of a bulb at the top. This allows them to be crimped, and filled with “a lightweight mix of aerated concrete and waste paper, which can be tinted to simulate marble, slate, or ceramic tile.” While the company plans to collect bottles from users to process into tiles, they’ve also developed a manual crimping machine that can be sent with large orders to facilitate making roofing tiles on site.

You’ve probably already figured out that Thomson’s pretty sustainability focused in his efforts… so doesn’t getting into the bottled water business undermine that? He’s not a fan of the concept, and doesn’t drink it himself, but he’s definitely improved the business model by making bottles ready for repurposing. He’s also made sure to source the water that goes into those bottles in a responsible manner: according to the company website, AGUA water is provided by Water Monterreal S.A.:

The facility is located on the continental divide at one of the narrowest locations of the western hemisphere.

The water is naturally regenerated through the endless vapor cycle created by constantly clashing combination of the planet’s opposing Pacific and Caribbean weather formations. The high mountain tropical cloud forest location borders the National Park Juan Castro Blanco and is recognized as providing one of the healthiest and purest mineral waters in the world.

That certainly sounds better than commandeering a spring somewhere. Finally, AGUA Water runs on a social enterprise model: profits will be reinvested in affordable housing. According to Co.Design, “Thomson’s plan is to reinvest that money into his housing projects: build a house, lease it to someone for three years, prepare them for a mortgage, and then get all his money back.”

Hard to think of a better model for bottled water. Know of other efforts along these lines? Tell us about them in the comments…