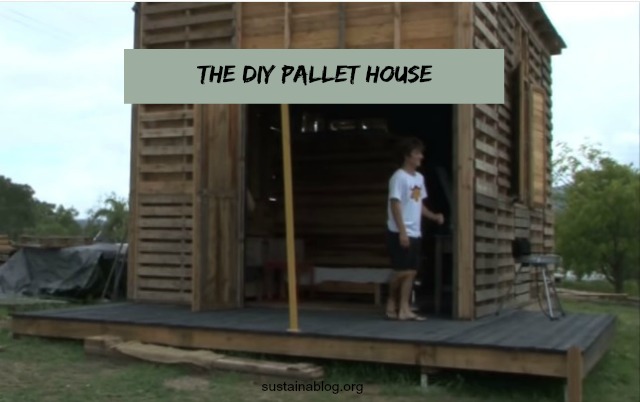 As we’ve noted before, used shipping pallets represent the biggest source of waste wood out there. And many, many people have used them to make funky, distressed furniture projects. That’s great that items made from waste wood have caught on become a bit fashionable… but that’s all this is, right? You wouldn’t want to use this wood for something you really need to count on… right? No one would want to live in a pallet house, for instance…

Well, we might want to rethink that, as engineering students from Australia’s CQUniversity have designed and built a house from wooden pallets that’s not only won awards, but also withstood a hurricane (or tropical cyclone, as they call them Down Under). Tropical Cyclone Marcia reached Category 4 on the Saffir-Simpson scale that we use here in the US. Despite 285km/h (that’s 177 miles/hour) winds, the prototype came through undamaged… and students Angus Hughes, Mattison Rose and Jessica Kahl think they might be on to a viable social enterprise concept.

Originally conceived for cheap housing for Hughes, the students think “The Shelter Project” (their name for it) would make a great flat-pack modular shelter for disaster victims. Take a look at this short video tour, and see what you think:

If you’re thinking “That looks like a great concept for shelter,” you’re not alone: the building concept, along with a social enterprise business plan developed by the team, won The Big Issue’s Big Idea competition. In addition to the structure shown above, the students want to add solar panels for electricity, and have homeless people in Australia build the structures. As part of their award, they’re meeting with “senior business leaders” to move The Shelter Project forward.

Kids these days, huh? If you’ve got other ideas for making this structure more durable, livable, or portable, do share… I’m definitely going to keep an eye on this one – very impressive!