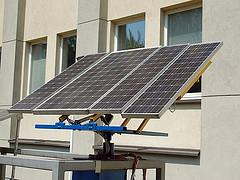 There have been several stories about companies and nonprofits donating solar energy systems this holiday season and I think that’s a measure of renewable energy’s success and the awareness of energy issues as a whole. Here are a few examples that might make you a little warmer and fuzzier this week:

The Capital Area Food Bank (CAFB) in Washington, DC received a $1 million donation of solar photovoltaic (PV) panels from BP America. The solar system is expected to save the food bank about $71,000 a year on energy costs, or 2o percent of its annual electric bill. CAFB distributes 20 million pounds of food to 700 member agencies annually. They told Renewable Energy Access that the amount of money they’ll save with the solar power is enough to serve an extra 200,000 meals next year.

Over on the West Coast, the San Francisco Food Bank received $215,000 in solar PV panels from PG&E and system installation from the San Francisco Environment Department. The solar power should generate about 115,000 kWh of energy and save the food bank $15,000 in electricity costs each year. That’s more than 70,000 extra meals.

More Nevada neighborhoods may see solar power systems, courtesy of Black Rock Solar, a nonprofit organization started by the Burning Man community (an art and music experience held each year in the Black Rock Desert). Their mission is to give away low cost or no cost solar power. Or, as executive director Tom Price explained, “We see ourselves as a Habitat for Humanity of renewable energy.” MMA Renewables Ventures and Sierra Pacific Power are partnering with Black Rock to install the systems. Their projects so far include a 30-kW array for a hospital in Lovelock and a school in Gerlach got a 90-kW system that could provide up to $20,000 annually in clean, free energy.