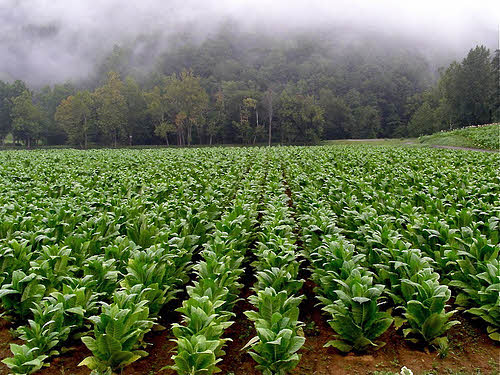 Despite tobacco plants’ smudgy reputation, they are being warmly accepted by the textile industry as the newest crop to be utilized in the making of all-natural fibers and dyes. Since only the leaves of the plants are harvested, Ploughboy Organics transforms leftover stalks and other agricultural waste into vibrant, non-toxic Avani Dyes from the Earth (which debuted at the London Textile Fair earlier this year) and Onatah Fibers.

Suzanne DeVall, the company’s founder, recalls while on a fact-finding mission to the tobacco fields of Antakya, Turkey, feeling inspired to further explore alternative uses for the nicotine-filled crops beyond their most popular purposes of smoking and chewing.

Some three years later, Ploughboy’s headquarters were opened in North Carolina, one of sixteen states still farming tobacco. For reasons ranging from increased public awareness to claims of environmental damage, the number of tobacco-growing farms in the United States has steadily declined from a half-million in the 1950s to 10,000 in 2007. Ploughboy believes they are on a path to reinvigorating the industry and creating more jobs within the farming, manufacturing and retail sectors.

Ploughboy plans to repurpose tobacco in other regions of the country as they prepare to expand their collections of earth-inspired hues and fibers to the home goods and apparel industries. You can learn more about this groundbreaking technology by visiting the company’s website and Facebook page.