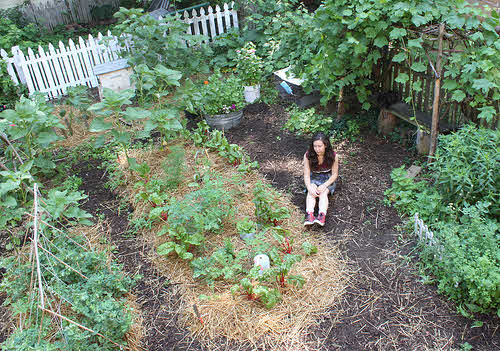 In the 2011 documentary Happy, psychologists look at the causes and behaviors that create happiness. The number one finding was that strong connections with friends, family and the community make people happier.

Finding connections between friends, family and community is something that new urban homesteaders strive for in their work and play. As a result of the recent recession (2008-2012), the term “homesteading” took a new definition. It defined someone who used homemade or homegrown resources to grow their own food, store rainwater and even generate their own electricity. As one homesteader puts it, “People moved to the city, floundered in crappy jobs, and realized that’s just not enough.” To be happy, they unplug from the grid and plug into community.

One blogger views the homesteading trend as one that rises with hard times, but tapers off in more bountiful economic times. And there’s likely a shade of truth in that notion. But urban homesteading still has many advocates who are on hundreds of online forums, attend gathering meetings and seeking friendship and more.

Where do urban homesteaders live? Where are they gathering? Using the Gallup Wellbeing Index as a jumping off point, here are the top five cities for happy homesteading.

Located on the Central Coast of California, Paso Robles has a relatively low population density compared to other cities in California. There are fewer than 30,000 people spread out over 19 square miles of land. Paso Robles’ warm climate puts it into the top five. Basically, warm weather makes for easier homesteading. Homesteader Linda Holliday wrote about washing clothes by hand. Paso Robles offers a dry, warm climate in which to dry clothes, garden, or bike ride.

Montana has lots of land: 147,042 square miles of it, in fact. That’s a population density of 10 people per every square mile. Montana is definitely a place where a person can unplug from the grid. But urban homesteaders really only have one choice here — Billings. With a larger population density, Billings is the best urban location for a homesteader.

Billings is the kind of place that a person can create a true permaculture, “an ecological design system for sustainability in all aspects of human endeavor,” according to Permaculture Institute. The method enables homesteaders with advice on building homes from scratch, growing their own sustainable foods, keeping yards clean with Husqvarna Trimmers, restoring ransacked landscapes and ecosystems, build communities and much more.

There is no one-size-fits-all approach when it comes to homesteading. Models come in a range, from supplementing food supplies with rooftop gardens, to creating a farm or digging a well. The Town of Barnstable, the largest community on Cape Cod, is the perfect blend of city and small town. While more affluent then the rest of the top five, with a median home price almost doubling in the past decade, Barnstable has more professionals and carpenters than the rest of Massachusetts. This population mix lets homesteaders tap into the economy when necessary. Homesteaders here can have a normal 9 to 5 job, while still managing a small urban farm, or even manage a natural products business.

Being able to live on the beach is the dream of most Hawaiian residents. It is part of Hawaii’s persona that people can live a natural life, farming the land and fishing the sea. Honolulu, which is on the island of Oahu, is the capital and most populated city in Hawaii. It has 68 square miles of land with more than half of the city on the coastline. Because of Honolulu’s economic mix between sugar growers and tourism, the homesteader has a lot of opportunity to become part of the community without losing sight of the natural lifestyle.

The Osborn family moved from Idaho to Honolulu to start a homestead on the island. It took them almost a year to find a small house that would suit their needs. When they did, they contacted the sugar cane growers and began using the leftover part of the cane as fertilizer for their farm. From there, they were able to grow enough food to feed their family and to sell back to the local markets.

Vermont tops the Gallup list of the happiest state in the union, while Burlington tops the list of best places for the urban homesteader. Burlington is 45 miles from of the Canadian border and sits on the coast of Lake Champlain. The university was founded in the 18th century so there is a culture of pedagogical acceptance that most homesteaders find welcoming. Farmers markets abound and fresh-made jams are on every store shelf. The movie Baby Boom even capitalized on this Vermont image, showing the high-powered career woman becoming a homesteader in rural Vermont.

Becoming part of a community can take place anywhere, really. But for stalwart homesteaders, these places above may be the best locations to homestead, and be around around other happy homesteaders.