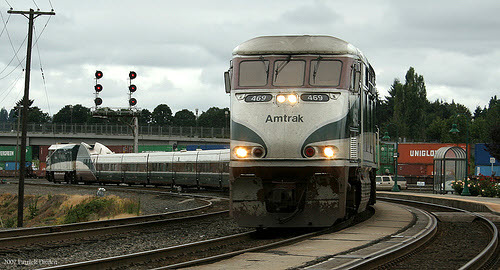 Taken the train lately? If you live outside of the United States, probably: travel by rail, whether for daily commutes or longer trips, is cheap and convenient in most of the developed world. Here in the US, though, commuter rail is limited to urban metro areas, and while Amtrak goes a lot of places, you can’t count on it to get you to your destination on time (which I know from experience – still remember sprinting through Chicago to get to an event only a little late a number of years ago).

Why is that? After all, the US has a rich history of rail development for moving cargo and people. And what would we gain from redeveloping rail infrastructure aimed at moving people, quickly and conveniently, across regions or the country itself? The second question is the focus of a new documentary, Trainsforming America, by young filmmakers Rebecca Sansom and Katie Chen.

What would we gain from investing in rail, especially high-speed rail? In short, lots: experts such as Stanford’s Anne Ehrlich and NYU Polytechnic University’s Richard Wener discuss the environmental, economic, and human health benefits throughout the film. Former Tennessee congressman Bob Clement discusses the political environment surrounding trains in the US. Rail activists discuss the social benefits of this method of transportation. And “person on the street” interviews show that average Americans would love a more robust rail system.Wa

But that’s all academic, right? Well, not exactly: we’ve had some rail success stories in the US, but Sansom and Chen show their viewers the real potential by traveling across Europe by train. Want to go from London to Paris, or Barcelona to Frankfurt? No problem – you can get there in a few hours (and on time). Want to work in a big city, but live in the country… while avoiding rush hour traffic? That’s also completely feasible. The filmmakers discuss the various European rail system with other riders, and hear very few complaints along the way.

Yes, this film takes a definite position in favor of rail travel, and advocates for it throughout. But the arguments are pretty solid, and the cutting back and forth from Europe to the US provides multiple illustrations of how ubiquitous rail service contributes to quality of life. Just think back to the last traffic jam through which you sat…

Thanks to Rebecca for giving me a sneak peak at the film! Got your own thoughts on how we can promote a “train culture” here in the US? Do share…