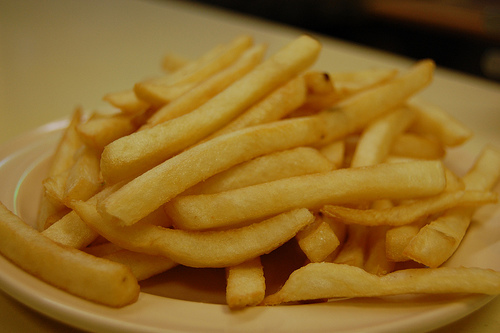 Today I was doing errands and decided to buy a large fry at McDonalds.  I do that occasionally, but I’m always a little disappointed with the flavor.  It was pretty good, but not nearly as tasty as when I bought them as a teenager in the early 1970s.  Each Friday night as I returned from using the Denver Public School System’s mainframe computer as part of my high school’s Computer Math Club (I know, seriously nerdy), I would stop at the Golden Arches for an order of fries (Actually invented in Belgium, not France).  The reason that they were so good back in the day is that they were fried in beef tallow, not the vegetable oil that has been used for a long time and today.

Most animal fats, and “tropical oils” are “saturated” which means that they consist of a long chain of carbon atoms each having  two hydrogens attached and being attached to the two neighboring carbons (see diagram above).  Only the end of the chain is different with a “carboxyl group” (COOH).  There are three of these chains (fatty acids) attached to a glycogen backbone which makes the actual oil or fat.  So the beef tallow is made of three “Stearic acid” chains (C18:)).   A fat is “mono-unsaturated” if the fatty acid chain has a double bond between two of its carbons, then in nature the remaining hydrogen attached to each of those carbons is on the same side of the chain.  That is called a ‘cis’ conformation and that is the way it is for all natural “unsaturated” fat.   The “healthiest fats” like olive, canola or sunflower oil all have only one of these ‘cis’ double bonds in the middle of the chain – “Oleic acid.”

In the 1970s, nutritionists and doctors began to say that our high rate of heart disease was related to the high amounts of cholesterol and saturated fat in our diets. They actually meant the volume of those oils, but the public message quickly lost the “in moderation” caveat. The first target was eggs, then butter and lard, then red meat and finally tropical oils (palm C14:0, coconut (C12:0…).  This was over-blown by the press and embraced opportunistically by the growing soybean processing industry and processed food industry.  We all started eating much more “vegetable oil” based on soybeans.  It wasn’t necessarily a good thing.

Before WWII, Americans mostly cooked with animal fats (butter, bacon fat, lard, tallow…).  We had known about Soybeans for a long time and Ford actually used plastics based on soy in the 1930s. But it wasn’t until the 1940s and the Chinese supply disruption of the war that the US acreage of soybeans grew dramatically.  Soybeans were found to be an excellent rotation partner for corn because they “fixed their own nitrogen” and in some areas they could be “double cropped” with winter wheat.  Soybean planting was originally driven by the high protein content as an animal feed. But since ~20% of the bean is oil, the US suddenly had a vast supply of a “vegetable oil.”  When the “saturated” and “tropical” oil scares hit, it was a huge opportunity to market all that oil.

But soybean oil is different from olive or Canola – it contains quite a bit of poly-unsaturated fat (two and even three double bonds in the carbon chain).  This gives it certain undesirable properties.  It turns rancid more quickly.  It stays liquid at lower temperatures.  During use as a frying oil it “peroxidizes” faster, generating off-tastes, so it has a shorter  functional “fry life.” Because it was becoming plentiful and cheap, food companies really wanted to use the soybean oil, but first it needed to be “fixed.”

The food industry developed a process where some or all of the double bonds in the fatty acids could be turned into single bonds with the addition of hydrogen atoms.  This allowed soybean oil to be turned into a butter substitute called margarine that, when dyed yellow, could compete for space on your toast.  The new process turned soybean oil into the “100% vegetable oil” that  sounded healthier in a society that had become obsessed about avoiding “bad fats.”  Processed foods started sporting big labels bragging “No Tropical Oils.”  Worst of all, they stopped cooking my McDonalds fries in beef tallow!

There was one problem with this “fixed” oil: some of the double bonds that didn’t go away ended up with their hydrogens on opposite sides of the carbon chain in the ‘trans’ conformation, something that never occurs in nature.  Oils than contained these ‘trans-fats’ had different properties than their natural ‘cis’ relatives.  That matters because there is a “bi-layer” of oil molecules that covers the surface of every cell in our bodies and the properties of those layers matter. If  ‘trans-fats’ become part of that bi-layer, the membranes may not function as they should. Eventually the nutritionists and doctors figured out that trans-fats are far worse for us than saturated fats.  The fix was no fix at all!

It took a remarkably long time for this discovery to translate into change in our food supply. Perhaps it was because society has become “fatigued” by the constantly changing story on what is good or bad for us.  Perhaps it took that long to overcome the billions of advertising dollars that had been spent telling the wrong story.

So, even though French fries cooked in beef tallow and eaten in moderation are perfectly fine, I got an order today that was only pretty good.  This is because no big food company has the guts to say they were wrong all those years.  They have adjusted the hydrogenation process so they make almost no trans-fat oil.  There are technologies to grow soybeans that can be a source of zero-transfat oils, but even with these advances, the frying oil still isn’t as good as in the old days.

Maybe we should be skeptical of warnings about the latest “food demon.”  Consider for instance “high fructose corn syrup” (HFCS) which is the current demonized food target.  Yes, if you consume vast quantities of this (or any) sweetener it will make you hyper, fat or type II diabetic.  But before you jump to something exotic like agave nectar, remember that marketing messages driven by opportunistic marketing dollars are not always the best thing to heed.

You are welcome to comment here or to email me at savage.sd@gmail.com.  My website is Applied Mythology

Looking for a wide selection of organic oils? We’ve got ’em, including olive, almond, and sesame oil.