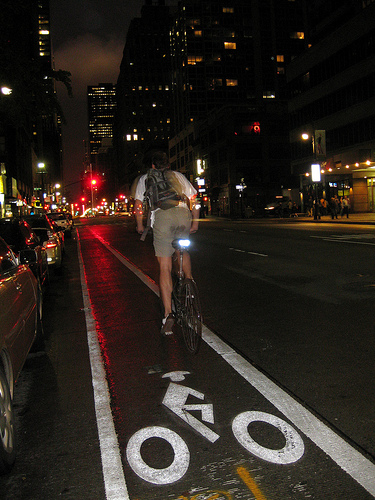 Even the most die-hard supporter of our current personal transportation infrastructure (essentially, roads and bridges designed for cars) will likely admit that bicycling (and walking) has some fundamental benefits: a very low environmental footprint, a lot of saved money for those using bikes for at least some of their transportation (though just how much savings is a matter of some debate), better health for riders, etc.

Ask those same people if they think government, whether at the federal, state, or local level, should pay for infrastructure to make biking safer and more convenient, and you probably won’t see the same level of agreement… they may well concur with some state and federal legislators that such spending is ripe for the chopping block.

But does that make economic sense? Jay Walljasper of People for Bikes had a detailed post today at Alternet spelling out the costs and benefits of investing in bike lanes and trails, and he makes some pretty compelling points for continuing such spending. Among them:

I’d add one more point to Walljasper’s argument: bicycling infrastructure creates jobs… as I noted in a post at SUNfiltered in January, a recent study by the Political Economy Research Institute at the University of Massachusetts at Amherst suggested that there’s no comparison between biking infrastructure and road-building in terms of job creation: the bike lanes and trails require more spending on workers vs. materials.

Yeah, I get it: times are tight, and a lot of pet projects have to go. But cost-benefit analysis has to be a part of the budgeting process… and bike funding strikes me as a true no-brainer.

Got further arguments for (or against) this kind of spending… or ideas for making it even more efficient? Fire away…