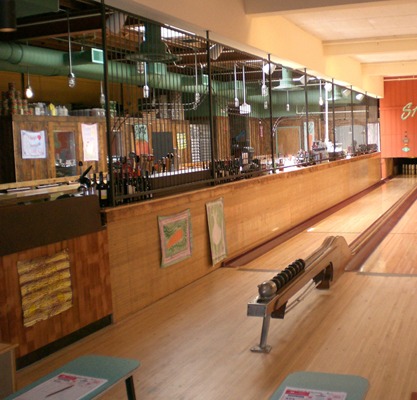 While I’m a big fan of reuse and repurposing, I generally don’t think of items made from reused materials as something that come out of a design studio. When I think of barnwood furniture, etc., I tend to think of outdoor workshops and sales stands on the side of the road, or at local events. But Steve Hanley show us that reused materials can still be design magazine quality: Maine’s Artas Designs takes used wood and other materials and turns them into furniture and furnishings for restaurants, retail stores, and other commercial clients.

Take a look at Steve’s Green Building Elements post below, and then let us know about other design studios reusing materials.

Former presidential candidate H. Ross Perot was once asked how to become successful. “Follow an immigrant around and do what he does,” Perot replied. That advice would work especially well if you chose Tadas Mikuzis and Art Timofejev, who were born and raised in Klatipeda, Lithuania. In 2001, they emigrated to Maine and started working with friends at Utopia Designs. There they learned how to transform wood, steel and other salvaged materials from old aircraft hangars and century-old barns into furniture and fixtures.

“I found that building furniture and putting my hands on materials and coming up with new designs was what I wanted to do,” Timofejev tells Mainebiz. Though he trained as a civil engineer, “I didn’t want to spend my days in front of a drafting board.” In 2010, the pair founded Artas Designs and hired two employees. Putting what they had learned at Utopia Design to work, they started by building booths, tables, and chairs for the Flatbread Co. pizza shop in Somerville, Mass., which was housed in a former bowling alley.

That job led to a story in Design New England magazine. Soon after it was published, they started getting calls from buyers from all over North America. “People like the fact that these materials are not ending up in a landfill, and they’re getting a nice piece of furnishing in their bars and restaurants,” says Mikuzis, who trained as an electrical engineer. “People really value the fact that there is a history behind the materials, that they might have something in their home or store that’s from a 120-year-old barn in Cape Elizabeth.”

Their products came to the attention of John Soule, retail store visual merchandising designer for L.L.Bean. Soule tapped Artas to build shelves, counters and display cases for high traffic areas of the company’s flagship store in Freeport.  Artas built chairs, racks for shoes and clothing, and directional signs. One of the displays they built even showcases L.L.Bean’s original pair of hunting shoes.

“Artas delivers a high quality product using honest and simple materials,” says Soule. “Their work demonstrates integrity, great design sense, resourcefulness and a clear focus on being a good business partner. We love to work with Maine companies when we are able. And we love even more when they share our environmentally friendly ideals. Using a local company affords the benefit of collaborating face to face, and our store design is better for it.”

As their fame spread by word of mouth, the partners found work making chairs for Luke’s Lobster, a chain of restaurants with stores in New York, New Jersey, Boston, Chicago and Washington, D.C. “When a customer walks in, we want them to feel like they’re coming into a lobster shack on the coast of Maine,” says Bryan Holden, who co-owns the business with his brother Luke. “Their use of reclaimed barn board for seats and carbon steel for framing added a nice complement to what we are doing.”

Next, David Libby, president of Town and Country Federal Credit Union came knocking on Artas’ door.  He wanted them to design a 14-foot long communal table made from floor joists from an old textile mill and reclaimed structural I-beam and square tubing. “I was just blown away by their creativity,” says Libby. We wanted our space to have that connectivity to the outdoors. We liked the synergy that these earthy elements of reclaimed wood and metal created with our open, flexible office space.”

Using reclaimed materials has other benefits beside being nice to look at. It also contributes to obtaining LEED certification for buildings, a desirable bonus for many environmentally conscious businesses today. The partners say their business has been growing about 15% a year. At a time when growth of the national economy is barely 3% a year, that is remarkable. Perhaps H. Ross Perot was right.